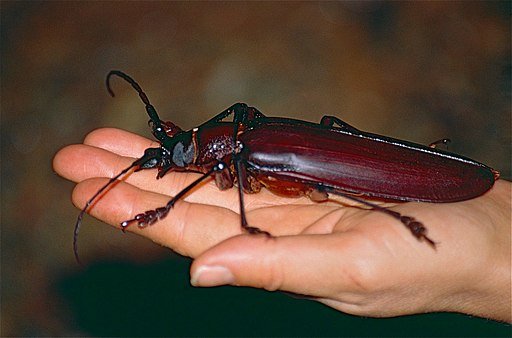 The giant Amazon beetle (Titanus giganteus) is an insectof the Coleoptera, which lives in the Amazon rainforest, especially in the warmer rain forests.

Beetles are very abundant in nature. Specialists estimate that there are more than 350,000 species of beetles, including beetles, along with fireflies, ladybugs and weevils.

Coleoptera are one of the largest taxonomic orders of life on Earth.

Beetles have wings and can fly as adults, but when not using them, they hide their wings under protective shell-like elytra.

How big is a giant beetle?

The size of T. giganteus is impressive for an insect: it reaches more than 17 cm in length in adulthood.

For this reason, it is considered one of the largest insects in the world, with two other beetles disputing its position, in this case known as rhinos, because they are endowed with a long thoracic horn that increases their length.

Among the rhinoceros beetles we have: Macrodontiacervicornia, which inhabits the Peruvian tropical forests, and Dynastes hercules, which is found in the tropical forests of South and Central America.

Both beetles exceed 17 cm in length, but use their long horn.

T. giganteus is equipped with powerful jaws that can split a wooden pencil into two parts. It also has sharp claws arranged on its strong legs.

Beetles are herbivores, fungivores, or carnivores. Some species prey on and damage crops, but there are also others that act as biological control agents.

What does the giant beetle eat?

The feeding habits of T. giganteus are very particular. It is a species that practically does not feed during its adult life.

A diet so unique that few species can do it, such as the Attacus atlas, a butterfly that lives in the jungles of Malaysia, considered the largest butterfly in the world.

Much of the life of T. giganteus takes place “underground”, hidden in the cavities of fallen and decomposed logs, where it lives. There, it seems, it feeds on decaying wood.

Furthermore, very little is known about the habits of this species, especially the female, which is rarely seen.

Reproduction of the Titanus giganteus

For fertilization, the female makes holes about 5 cm wide and 30 cm long in the trunk or rotten wood.

There it deposits the egg, which takes years to complete its cycle and reach adulthood, before coming to the surface.

Then, adult individuals only live a few weeks, during which time they do not consume any type of food.

The beetles are mostly edible, especially in their larval stage.

This is the case of some 443 species of beetles consumed in more than 120 countries. This is the case with the larva of the Rhynchophorus palmarum, suri, chontacuro, or palm worm, the most consumed insect in the entire Amazon basin. See: edible insects.

The beetles have a great symbolic relevance for the indigenous people. The Uitoto, from Leticia, in the Colombian Amazon, use them in their prayer and healing ceremonies.

They consider beetles to be winged animals that fulfill the function of magical messengers. In healing ceremonies, beetles are asked to protect people from disease.