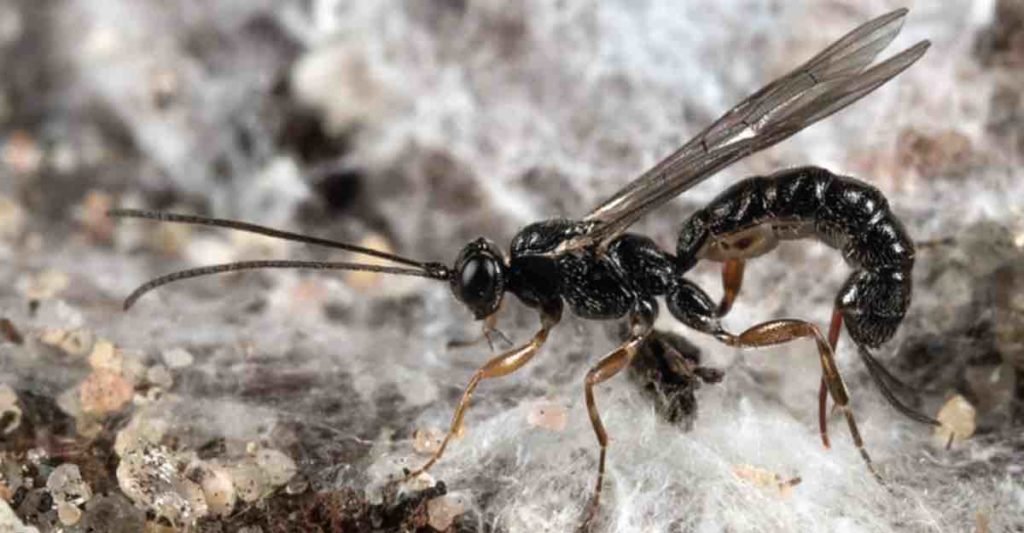 Giant stinger wasp Clistopyga crassicaudata, also called scorpion wasp, is a black or dark-colored parasitoid wasp that inhabits the transition zone between the Andes mountain range and the lowlands of the Amazon rainforest, covering an extensive region of tropical rainforests, mainly of Colombia, Ecuador, Bolivia and Peru.

This species is a hymenopterous insect belonging to the family Ichneumonidae, which groups the parasitoid wasps, which show on the anterior wings the second recurrent vein as one of their most distinctive characters. It is a parasitoid wasp, which is not a parasite.

A parasitic insect is an insect that lives at the expense of a host, generally another vertebrate animal, taking advantage of it.

A parasitoid insect paralyzes its host in order to manipulate and feed on it, laying its eggs in or on the host to feed in its larval stage.

Why is the giant stinger wasp lethal?

There are more than 50,000 species of this parasitoid type in the order Hymenoptera alone. These host-parasitizing insects are called idiobionts. The peculiarity of Clistopyga crassicaudata is that it paralyzes and…kills the host.

C. crassicaudata has a long, broad stinger, which serves, like all female wasps, such as bees and hornets, two purposes: to lay eggs and to inject venom into its victims.

It uses the long stinger to place the egg in or on animal hosts, which often live in the cavity of a tree trunk.

It also uses it to paralyze the host. It prefers to lay its eggs in spiders or spider egg sacs that live in nests, paralyzing them with its venom, to live at their expense, and then kill them.

When was the giant stinger wasp discovered?

This species was new to science. It was discovered in 2018 by a group of researchers composed of Latin American professors (including E. Palacio and S. Bordera) and Professor Ilari E. Saaksjarvi, from the University of Turku, Finland.

C. crassicaudata is the species of the family Ichneumonidae with a very long stinger, perhaps the longest known, but it is not the largest wasp.

That place goes to the Asian giant hornet(Vespa mandarinia), the world’s largest wasp, which originated in Japan and entered North America, specifically Washington State and British Columbia, creating great alarm among the population.

Differences between a bee sting and a wasp sting

It is necessary to be clear that there are differences between the sting of a bee and that of a wasp.

The sting of a bee is serrated or harpoon-shaped, so that when it stings, it is embedded, along with part of the abdomen, in the wound, causing the death of the insect, which only stings once.

The wasp’s stinger, on the other hand, is smooth and retracts, it does not remain stuck in the wound. The wasp can sting several times in a row, without risking its own life.

The sting symbolically represents betrayal or evil behavior, or is evidence of the insect’s “igneous” nature.

In many mythologies the sting symbolizes the power that “burns”, associated with fire, mainly of the bee, which is a symbol of industriousness and order. And even fertility, associating the sting with a phallic sign.

On the other hand, the wasp is different: it does not give honey, and loses much of its nutritional symbolism, which nourishes through honey. The sting of the wasp is the sword that defends, but that sticks, even treacherously.

In the play The Wasps, by the Greek playwright Aristophanes, the corrupt judges of Athens were depicted on stage as black-clad beings with a long sting attached to their buttocks.

There is not, perhaps because of the recentness of its discovery and registration, in 2018, much information on C. crassicaudata, and only specialists are making the first descriptions and study of its behavior.