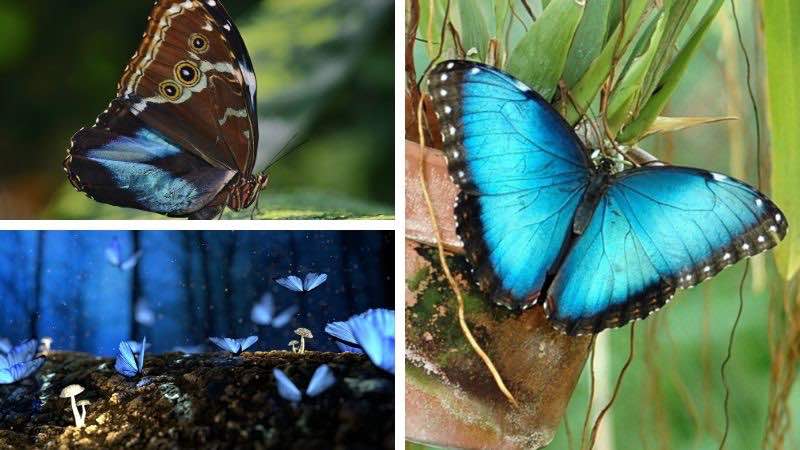 The name blue morpho butterfly is a generic term used to designate more than 65 species of the genus Morpho that inhabit the American Neotropics.

There are many species of blue butterflies in the world. Although probably none surpasses in beauty and size as the Morpho menelaus butterfly, belonging to the genus Morpho of the family Nymphalidae.

They stand out for exhibiting iridescent metallic blue flashes on their wings, combined with the black border of their wings.

It is known, however, that these striking shades are due to the presence of microscopic, light-reflecting scales located on the back of the wings.

The Morpho menelaus butterfly, the most representative and well known of the species of the genus, is a large butterfly, in relation to other butterfly species and genera, with a wingspan ranging from 15 to 20 cm long.

When it closes its wings, to camouflage itself in the surrounding vegetation, what is seen is an ordinary butterfly, with dull brown wings, with small drawings simulating eyes.

The species shows a certain sexual dimorphism: the wings of the males are wider than those of the females, and their color is brighter.

The more intense coloring of the wings of the males is due to the fact that, being territorial insects, they use this characteristic to warn rival males.

What does the blue morpho butterfly eat?

The Morpho menelaus butterfly is diurnal and solitary.

It feeds on fruit sugars, using the elongated proboscis-like mouthparts to release the juices.

Reproduction of the blue morpho butterfly

The female’s eggs are fertilized and placed in a safe place. After nine days the eggs hatch. And it begins its process of transformation or metamorphosis from egg to adult.

The flight of the Morpho melenaus is slow and elegant, flapping its wings in open areas, on roads or trails in the forest, flying at a height between 30 cm from the ground up to 4 m (12 inches).

It is a spectacle to see it, with the striking iridescent flashes it emits, due to the physical effect of the refraction of light on the scales on its wings.

Where does the blue morpho butterfly live? (Habitat)

There are many species of blue butterflies of the genus Morpho. De Vries included three genera within the subfamily Morphinae, present in a wide geographic distribution that includes Mexico, Central and South America.

Of these, the greatest concentration of species is found in the countries of the Amazon basin.

They abound in the vast Brazilian ecoregion of the Cerrado, a tropical savanna with an extension of almost 2 million km2, which occupies the states of Goiás, Distrito Federal, Mato Grosso and Mato Grosso do Sul.

Elsewhere, as in North America, we find magnificent species of blue butterflies such as the Mission blue, from California; or the Eastern tailed blue, from the eastern United States, or the Karner, or the Pacific dotted blue, or the Fender, from Oregon.

Is the blue morpho butterfly in danger of extinction?

Where is it found, why is it lethal? When was clistopyga crassicaudata discovered?

How big is a giant beetle? What does it feed on? Reproduction of the titanus giganteus, where does it live and what is known about this species?

The suri, chontacuro or larva of the Rhynchophorus palmarum beetle, is a plague, a super-food and even a medicine for the indigenous people of the Amazon.