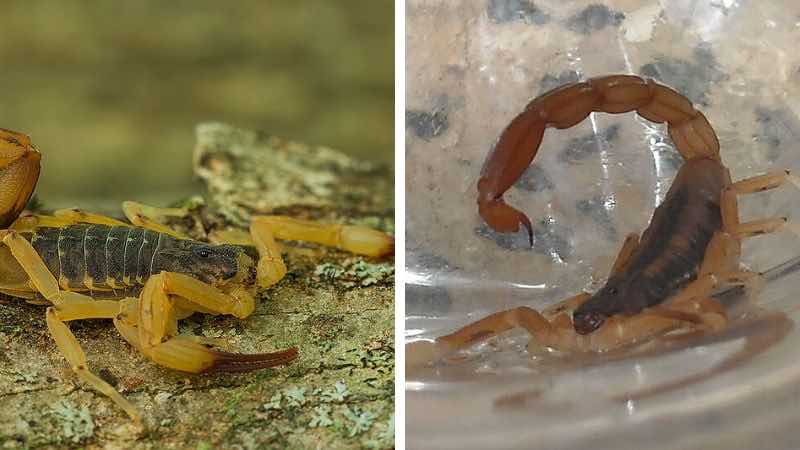 One of the most feared arachnids is the scorpion Tityus trivittatus, of the Buthidae family, which inhabits the tropical and temperate regions of South America. More frequent in Argentina, Braziland Paraguay.

The species has a length of about 65 mm, two long, strong and fine palps or pincers, with inner teeth on the edge, reddish-yellowish in color and with three dark bands that extend along the body.

His tail is thin. It is a nocturnal hunter, spending the day hiding in cracks in the floor or walls or in dark areas. It is a solitary species.

The reproduction of the species occurs sexually or by parthenogenesis (that is, without the need for the eggs to be fertilized by a male).

The eggs develop for several months in an oviduct inside the mother, until they hatch.

Other scorpions of the genus Tityus

There are between 1,500 to 1,800 species of scorpions registered in the world, assigned to various genera, all of them poisonous.

One of them is the genus Tityus, which includes at least 190 species that live in South America, Central America and the Caribbean.

These are species that differ from each other, especially in their habitats or in some small morphological characteristic that makes them unique.

Of all the scorpions, some 25 to 30 species, belonging to seven genera, are considered potentially dangerous for humans.

Some very lethal, such as those of the genus Andronoctus, with a thick tail, particularly deadly, known, as its name indicates, as a man-killer, and also some belonging to the genus Tityus. 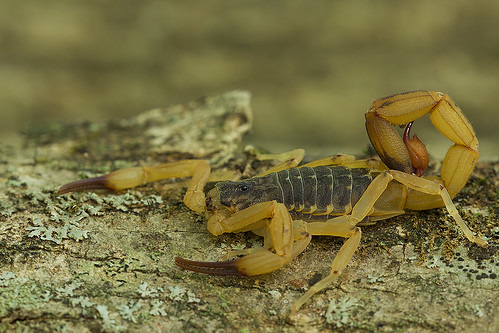 Other species belong to the Tityus genus, other than T. trivittatus, which can be found in South America, such as T. serrulatus, known as the Brazilian yellow scorpion, or T. falconensis or T. barquisimetanus, common in Venezuela, or T. pachyuros, present in Colombia.

The poison of scorpions

The venom of scorpions is locked in a valve located in the final stretch or section of the animal’s tail.

The scorpion, or scorpion, synonymous terms (used according to the different regions or popular beliefs that ensure that the scorpion is poisonous and the scorpion is not), uses its venom to paralyze and trap its prey and as a defense mechanism against his enemies.

The potency of scorpion venom depends on the species being referred to.

But, in general, scorpion venom is a powerful neurotoxin, made up of a mixture of water, salts, small molecules, peptides, and proteins.

The element responsible for the effectiveness of the poison resides in a series of peptide toxins that correspond to a group of between 23 and 78 amino acids.

A group of researchers isolated 200 peptide toxins from a selection of 30 species of venomous scorpions.

What kind of poison does the scorpion Tityus Trivitattus have?

The venom carried by scorpions of the genus Tityus is of the neurotoxic type, which produces alterations in the central nervous system (brain and spinal cord).

The scorpion’s stinging apparatus consists of a pair of glands located at the base of the last segment of the tail, or telson, where a kind of bulb is found and ends in a hollow, curved and sharp stinger.

When the scorpion attacks, it raises its tail over the body, tilting it forward, forming an arc, to expel the poison through the stinger, it does so by contracting the muscles that surround the glands that store the poison.

Why do scorpions sting multiple times?

It has been discovered that the venom injected by a scorpion is not always the same.

The first time the scorpion stings, it secretes a poison known as prevenom, which is transparent and relatively less toxic (it does so to paralyze its small prey or to warn of its danger and scare away the predator).

But when it stings again, and in successive stings, it injects a poison, with a viscous, opaque, milky and much more toxic appearance, which it uses to face greater dangers.

What is not known is how the scorpion discriminates risk and administers the two types of venom.

Scorpion venom is very dangerous to people, but it is usually lethal to children under the age of five or the elderly, who lack a strong immune system.

And it is also complicated in the case of people who suffer from certain diseases such as diabetes or hypertension.

People stung by a scorpion feel intense pain, heavy sweating, redness in the area affected by the bite, which gradually swells.

Then they feel cramps and the muscles responsible for breathing begin to paralyze.

The symptoms and severity of the clinical picture depend on the power of the poison, the species of scorpion that stung, and even the situation experienced by the scorpion itself: the poison is less powerful or concentrated depending on whether the scorpion had just eaten or to hunt, or whether it was his first injection of poison or not.

Depending on the circumstances of the immune resistance of the bite, the speed and efficiency of its care, and the use of the correct antidote, people can recover.

But others may have a heart attack, or severe kidney failure, or a stroke (cerebral infarction or CVA or thrombosis, affecting the blood vessels that supply blood to the brain), or peripheral vascular disease.

An amazing application of scorpion venom

Scorpion venom can be used to develop drugs with antitumor properties and capable of reinforcing the immune system.

But its most surprising application is related to its action on the blood-brain barrier (BBB). The BBB is a protective barrier between the blood vessels of the brain and the cellular tissues.

This barrier allows blood to flow freely to the brain, but prevents contact of most of the substances that go in the bloodstream with brain cells.

The function of the BBB is to protect the brain from foreign substances, which can be harmful to the brain.

The problem is that among these substances are drugs used in the treatment of patients with brain tumors and people suffering from neurodegenerative diseases, such as Alzheimer’s or Parkinson’s.

The BBB is made up of endothelial cells that line the blood vessels in the brain, are tightly bound together, and prevent foreign molecules from entering the brain, where drugs travel.

They allow water, ions, ethanol to pass through, but not some molecules such as proteins (the basis of many drugs are proteins). Well, what does that have to do with scorpion venom?

Scorpion venom is composed of neurotoxins that are capable of crossing the BBB and altering the cells of the central nervous system.

Researchers have replicated the chemical structure of the neurotoxins contained in scorpion venom to introduce drugs to the brain, scoring a “goal” that can be very beneficial for the treatment of patients with brain tumors and neurodegenerative diseases.