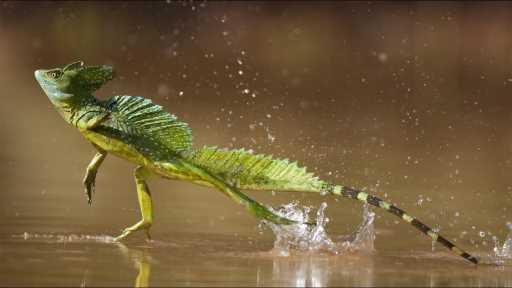 This lizard belongs to the family Corytophanidae, of the genus Basiliscus, to which several species such as B.basiliscus belong, B. galeritus, red-headed; B. plumifrons, green or double-crested, and B. vittatus, brown with stripes, which share some characteristics such as habitat (tropical rainforest from Central America and southern Mexico to some regions of northwestern Mexico). Colombia, Ecuador and Venezuela, or the presence of at least two ridges or sails, as well as other aspects of its morphology.

The name of the genus Basiliscus comes from the Greek basiliskos, which means small king, due to its crest on the head, and its elegance and mobility.

The species Basiliscus basiliscus measures 70 to 75 cm, including the long tail, and can weigh from 200 to 500 g. It resembles the iguana, but its body is more upright and slender.

This lizard grows according to seasonal variations, especially to the distribution of rainfall in its habitat, to which it is very sensitive. Likewise, social interaction with other individuals (Van Devender 1978).

It has three crest-shaped sails: on the head, back and tail. It moves with great ease.

Its skin is brown or olive in color, with the ability to modify it, with green or yellow shades. It has small light yellow lines on the underside of its body, and three longitudinal lines on its throat.

Another characteristic of the basilisk, and of its genus, is that it can flee from predators by opening a hole in the sand to hide.

To keep sand out of their nostrils, they have a ring of muscles that they close to protect themselves.

What do basilisks eat?

Its diet is omnivorous, mainly insectivorous, but it also eats meat, such as fish, frogs or other small lizards. Their diet is generally insects, flowers, fruits, tender stems, eggs.

▷ Reproduction of the jesus christ lizard

Sexual maturity of this lizard begins near the end of its first year of life. Individuals of different sexes are attracted to each other by secretions from glands located in their tails.

When fertilized, the female lays three to four units of eggs per year, each unit consisting of 10 to 20 eggs. Once laid, the female abandons the eggs, which begin to hatch about three months later.

▷ Basilisk runs over the water.

The most notable characteristic of the B. basiliscus is its ability to run on the surface of the water. That is where the name Jesus Christ comes from.

According to the Gospel of Matthew, Jesus Christ performed the miracle of walking on water. That is precisely what this lizard does.

But not only him. Also afloat on the surface of the water are some aquatic birds, such as the achichilique, some spiders, the Brazilian pygmy geo pygmy, which has hydrophobic skin that repels water, and dolphins, which perform certain movements that look like they are playing by walking backwards in the water.

▷ What keeps the lizard jesus christ from sinking?

This ability of the basilisk Jesus Christ to walk, or rather run, on water is due to the physical principle known as surface tension, due to the cohesive forces that act on the molecules of any liquid to hold them together.

The basilisk, when running in a hurry, takes advantage of a sort of interface between air and water, turning the water into a trampoline (Glasheen, Mcmahon 1996).

It runs very fast on the surface of the water, taking advantage of the fact that its hind legs have a kind of dermal fins or lobes that open, increasing its support surface.

If it stops, it sinks in water, and must swim like other lizards. This is not a problem for the basilisk, because it can remain submerged in water for up to thirty minutes.

When it is on land, it wraps these “fins” around its body. But he only takes advantage of this ability when he runs fast, without stopping, which he can do for about two minutes.