A reader of the portal delamazonas.com asks us if dinosaur fossils have been found in the Amazon basin, and if so, when they existed and when they became extinct.

From that super-interesting question more and more questions arise.

But in order to answer these questions correctly, it is first necessary to know some basic concepts…

What are fossils and what are they used for?

Fossils are like an open book that tell the history of the Earth for a paleontologist.

They tell him a story that only he can read with some certainty or, rather, with some approximation.

They talk about ancient life forms and possible ecosystems that existed.

The word “paleontology,” the profession of paleontologists, consists of three Greek words: palaios, ancient; ontos, being, that which is; and logos, treatise, foundation.

The paleontologist reads the remains, footprints or casts of living beings that have not existed for more than 10,000 years, which is the minimum date to be considered a “fossil” .

How are fossils formed?

Fossils are organic substances that have been petrified by chemical and geological processes and are preserved within a rock, usually a sedimentary rock.

There are 4 main ways in which fossils are formed:

Among the fossils there are some that stand out more than others and have become famous, such as those mentioned below:

Dinosaurs, yes, but what are dinosaurs?

Dinosaurs are among the largest animals that have existed on Earth, but not all large animals are dinosaurs (See: Giant animals of the Cenozoic Era in the Amazon).

A dinosaur is a “terrible lizard”, a large terrestrial diapsid animal that lived during the Mesozoic Era, between 255 and 65 million years ago.

What is a diapsid animal?

Large animals differ from each other in several characteristics. One is their behavior in the habitat. But the most important characteristic is the anatomical structure of the skull, especially the existence or not of the temporal fossae.

The temporal fossae are hollows, holes or recesses in the skull located behind the eye sockets. These hollows make the skull lighter and allow the insertion of muscles that move the lower jaw.

The dinosaur was a large diapsid animal that lived on Earth in the Mesozoic Era, between 255 and 65 million years ago.

Not every large animal is a dinosaur

Thedimetron, with a definite reptilian appearance, is called a dinosaur without being a dinosaur.

It is a therapsid with a synapsid skull, which populated the Earth in the Paleozoic Era, between 300 and 270 million years ago, at a time before the dinosaurs.

What are the 2 main groups of dinosaurs?

Dinosaurs belong to the superorder Dinosaurea, which is divided into two groups or orders: Ornithischia and Saurischia .

The order Ornistiquio corresponds to dinosaurs with “bird hips”, in which the hip bones (pubis or ischium) are oriented backwards. Like Triceratops or Parasaurolphus. They are generally herbivorous dinosaurs.

The order Saurischian is the “reptile-hipped” order of dinosaurs with differently oriented hip bones. In this order there are two groups: sauropods (herbivores with large wingspans and long necks equivalent to about one third of their entire body) and theropods (bipedal carnivores). 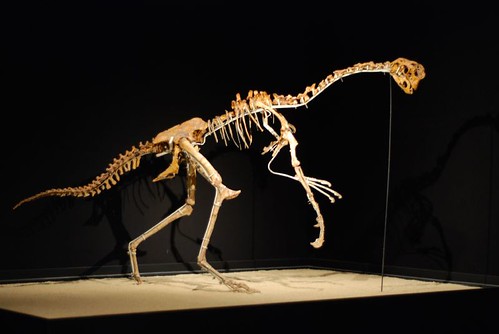 Difference between true and modified diapsids or… How to differentiate a dinosaur?

We already know that dinosaurs are large terrestrial diapsid animals (with two temporal pits), but this group also includes reptiles and birds.

Among the reptiles there were several species of extinct prehistoric animals: terrestrial reptiles (dinosaurs), aquatic reptiles (ichthyosaurs and plesiosaurs) and aerial reptiles (pterosaurs).

They were differentiated by the configuration of their skeleton, especially their skull (with two temporal pits) and by the ecosystem they inhabited and their feeding habits.

These prehistoric diapsid reptiles lived about 190 million years ago. A long period in which they evolved in their structure.

Some remained diapsids all this time.

Others lost a temporal fossa, becoming synapsids: ichthyosaurs and plesiosaurs.

Others lost their two temporal pits: the pterosaurs.

The only prehistoric animals that retained their two temporal pits were the dinosaurs.

For this reason they are called “true diapsids”, while the other two groups are known as “modified diapsids”.

There are no aquatic or aerial dinosaurs.