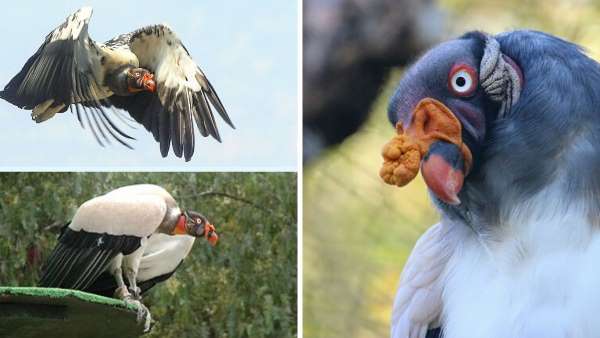 The King Vulture (Sarcoramphus papa) is also known as the condor of the jungle, royal condor, king vulture.

It is a carnivorous animal; it is a scavenger bird of the cathartidae family, which feeds on dead animals, which it perceives with its highly developed sight and smell.

Where does the Zopilote or king vulture live?

It inhabits tropical forests and is widely distributed from southern Mexico to Argentina, passing through the entire Amazon basin.

It lives near bodies of water, as it needs to consume a lot of water to survive. His body is picturesque and even elegant. Its body plumage is mostly white, with soft shades of pink and yellow.

Wing and tail feathers are almost black. Its head and neck lack feathers. The skin has shades of purple and red on the head, orange on the neck and yellow on the throat.

It has a very noticeable crest on top of its beak.

Behavior and reproduction of the King Vulture

It is not a migratory bird. Lives solitary or in small family groups.

It nests in tree hollows, where the female lays a single egg at a time. It has almost no predators, except for certain animals such as the jaguar and the snake.