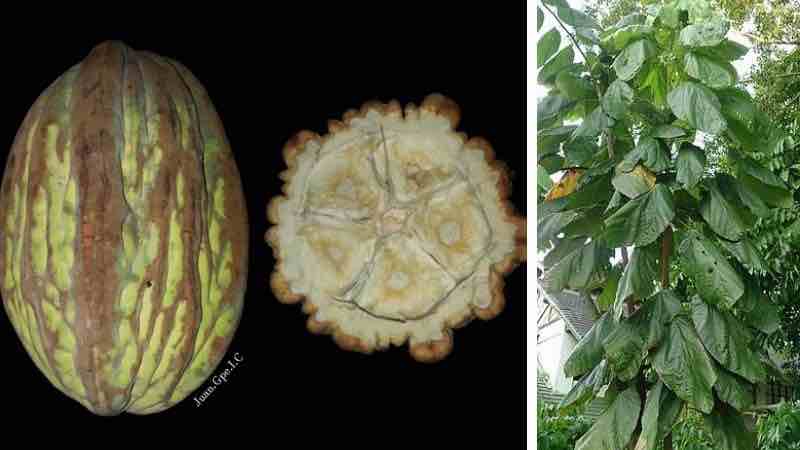 In the Peruvian Amazon it is called macao, majambo, wakampe. There the pulp of the fruit is consumed as fresh fruit, its thick, large and hard peel is used as a container.

Its name comes from the fact that it has two colors, which is why it is called jaguar tree.

Trees from 7 to 12 m high. Its trunk is gray, the leaves are alternate, oblong or oval in shape. The fruit is woody, oblong or subglobose-ellipsoidal in shape.

The pericarp is hard, with prominent ribs and reticulated intercostal spaces. Its color is greenish brown when unripe, turning yellow or reddish yellow when ripe.

The pulp covering the seeds is cream or pale yellow in color. This species is probably native to Central America and is widespread from Mexico to northeastern Brazil, Colombia, Venezuela, Ecuador and Peru.

The fruit of Theobroma bicolor is a berry, the largest of the Theobroma genus. It reaches 25 to 35 cm in length and 12 to 15 cm in width.

The fruit is composed, on average, of 27% pulp, 59% peel and 14% seeds. This means that there is a lot of waste if the peel is not used productively.

Macambo has been used in food since pre-Columbian times by the Mayan people. Its use was so relevant that it is mentioned in the Popol Vuh, when a drink called pataxte was elaborated.

It is currently used in Mexico to make candies, such as marzipan and nougat, and even chocolate, mixing its beans with those of Theobroma cacao.

It also prepares “aguas frescas”, popular drinks in Mexico. In the Oaxaca region, a traditional drink known as popo or capuchino oaxaqueño is made.

Experimental research has shown that the seeds of the T. bicolor contain about 51% fat, 17% protein and 13% fiber, which gives it a high nutritional potential and the possibility of becoming a promising ingredient for a functional food and to be a raw material of interest for the chocolate industry.

In this sense, chocolate coating has been made from seeds of T. bicolor and T. grandiflorum.