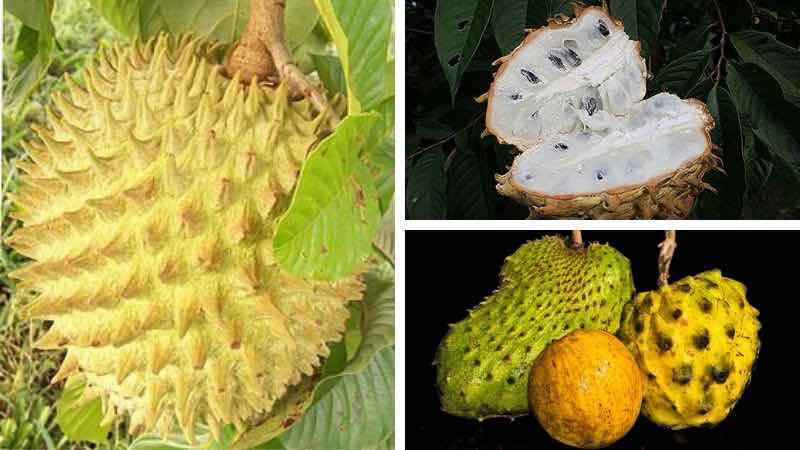 There are approximately 65 species in the genus Rollinia, but only Rollinia mucosa is cultivated for its fruit (Janick and Paull, 2008). Synonyms: Annona mucosa Jacq. and Rollinia orthopetala A.DC. (Food and Agriculture Organization of the United Nations, FAO, 1987).

✅ Geographical distribution of the Amazonian Anon or Biribá

The probable origin of Rollinia mucosa is located at the western end of the Amazon Basin and it is now widely distributed throughout the lower humid tropics of the Amazon Basin, as well as occasionally in the southern Orinoco Basin.

This tree can be found in almost every orchard in the Amazon region, being a very popular fruit in the Brazilian and Colombian Amazon.

The Amazon Anon tree reaches a height between 6 and 10 meters and its leaves are about 15 cm long. Propagation is by seed and grafting; it enters into production between 3-5 years.

It is not grown commercially but can be found in orchards and market stalls as well as in local street sales. It requires fertile and well-drained soils, although it grows quite well in poor clay soils.

This tree flowers mainly between August and September and fruits from January to June (FAO, 1987; Ministry of Agriculture and Irrigation, Government of Peru, 2020).

The fruit is globular, spherical, oblong, or conical, and has various sizes and weights, from 200 to 5,000 grams, being the color of the skin green and turns yellow with the ripening process (Quevedo and Montañez, 1994); it also has dotted protuberances like the pineapple.

The pulp of the Anón Amazónico is bank or cream colored, with a soft, fibrous and mucilaginous texture, juicy and with a less acid taste than the soursop; the seeds are dark brown to almost black (FAO, 1987).

The fruits are harvested by hand and special care must be taken not to mistreat the protuberances and even less to break them so as not to anticipate their oxidation.

According to Montenegro and Guzmán, cited by Quevedo and Montañez (1994), the Anón Amazónico has a high sugar content similar to that of the guanábana (Annona muricata L.), and lesser in relation to the common anon (Annona squamosa L.) and cherimoya (Annona cherimola Mill); it is a good source of energy, vitamin C and minerals.

The nutritional composition of the Amazonian Anon per 100 grams of pulp is:

Source: (Ministry of Agriculture and Irrigation, Government of Peru, 2020).

In the image above, other anonas, from left to right: guanabana, custard apple and anona.

✅ Uses and benefits of the Amazonian Monkey for health

The ripe fruits of the Amazonian Anon are a source of food for birds and wild animals, as well as for human consumption.

It is eaten fresh or processed in the preparation of juices, sorbets, sweets and compotes; it is also added as a filling in cakes or pies.

According to the Ministry of Agriculture and Irrigation, Government of Peru (2020), second quality fruits are used for pig and fish feed.

On the other hand, the wood of the biribá tree is used as firewood and in the construction of boats and crates; it is also used in rural constructions and as a handle for tools (Ministerio de Agricultura y Riego, Gobierno de Perú, 2020).

At the same time, biribá helps to lose weight, since the fiber contained in the fruit provides a feeling of satiety.

In addition, because it is sweet, it can replace the consumption of industrialized sugar in other foods, that is, consume something sweet in a natural way; it also combats fatigue due to its potassium content (Pimentel, 2020).

On the other hand, the consumption of the fruit and leaves of Biribá or Anón Amazónico, as well as its ground seeds, have favorable effects in the prevention and treatment of some diseases: anti-cancer properties are attributed to it.

In turn, it reduces the possibility of osteoporosis and strengthens bones; the leaf extract acts as an anti-inflammatory; it is also used to treat diseases such as diabetes, hypertension, depression, asthma and rheumatism (Pimentel, 2020).

Finally, Vélez, quoted by Quevedo and Montañez (1994), states that this fruit is used in Brazil for medicinal purposes, as an analeptic (it has cardiovascular and respiratory effects on the body) and antiscorbutic due to its high vitamin C content.