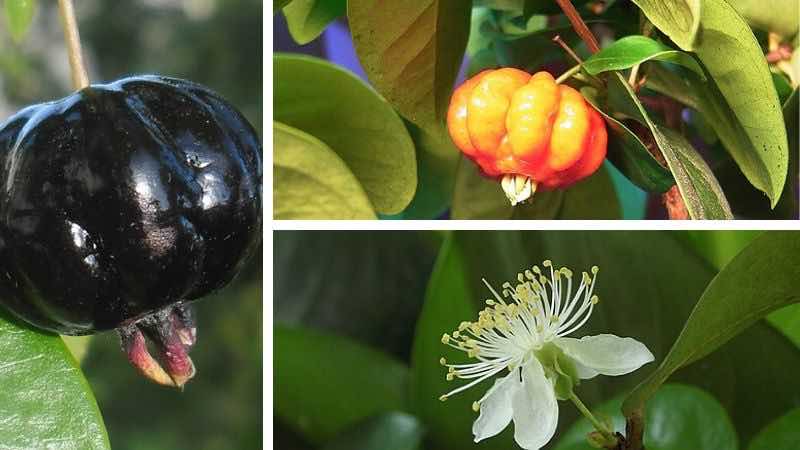 Its foliage is persistent, its roots are deep and large, its branches are thin and uneven, its leaves have a bronze color with a membranous consistency when they are young and when the leaves are adult they have a dark green coloration and sometimes have reddish colorations in the winter. Its limbo is oval-lanceolate and has a size between 2.5 to 7.0 cm wide and 1.2 to 3.5 cm long, its ribbing is rounded, shiny. (Lorenzi,1998).

Plants are seed-propagated and begin to produce fruit between three and four years of age. Even when grafted, they can produce a greater number of fruit with good flavor and high antioxidant content within a year after grafting (Griffi s et al., 2009).

The planting of pitanga is done mainly by seeds and it is advisable to plant it in the spring in order to benefit the germination process and for its good development. Initially it has a slow growth and needs some shade.

The plant is resistant to strong winds and very low temperatures. It has a certain tolerance to dry soils, it does very well in semi-arid conditions, as long as the soil is provided with a minimum amount of water to keep it moist.

It grows well in different types of soils, both sandy and sandy-clay and also in stony soils (Villachica et al., 1996).

The following steps can be followed to plant pitanga:

✅ Description and characteristics of pitanga cultivation.

In order to plant the pitanga, a good systematization of the soil and a good supply of organic matter must be done with enough time to achieve a good weed control.

Planting should be done on canals that also have a minimum slope to allow good external drainage of the soil.

To plant the Pitanga tree, you should always use seeds that are practically new because they are the ones that can germinate just a month after being planted.

If a seed passes the 4 weeks its fruit will not be the same or the plant will not bear as expected. In addition, irrigation is a fundamental element to obtain a plant of optimum productive size in the shortest possible time.

It is recommended that pitanga not be planted at the beginning of the rainy season; it is preferable to plant it on cloudy days to avoid dehydration (de Melo Silva, 2006).

Pitanga should be planted in a frost-free period, taking into account the water deficit during the summer months. In this sense and given that there is generally rainfall and it is not a period of frost, spring is the most propitious time to carry out plantings (Vignale, et al., 2018).

The fruit of the pitanga is classified as a globe-shaped berry, flattened at the poles, with 7-10 grooves or indentations more or less marked lengthwise, 1.5-5.0 cm in diameter. When the ripening process begins, the fruit turns from green to yellow, passing through orange to red and reaching a dark red (Sanchotene, 1985).

The pulp of the fruit is very juicy and aromatic; its flavor is slightly acid, because of this it is very appetizing and its fruit can be consumed directly from the tree or in the form of preserves, jams, salads, juices, ice creams and pastries are also made, also some people use to macerate it in alcohol which produces a liquor of an unmistakable and tasty flavor, they are also useful in perfumery.

The pitanga offers a great variety of colored fruits such as red, pink, red-violet, almost black, which gives a great diversity of flavors. They are rich in vitamin A, phosphorus, calcium and iron, from which wine or vinegar can also be produced.

The fruits are small, with an intense and characteristic aroma and contain tannins with staining pigments. Contains 1 or 2 large seeds. The fruits are rich in lycopene, the pulp is a good source of calcium, phosphorus and iron (Hoyos, 1989).

The potted pitanga reaches approximately 3 to 4 meters in height, the fruits appear isolated or in clusters with two or three fruits in the new ones and are born in full sunlight or under shade, it develops easily without fertilizers, responds favorably to the application of water (Griffi’s, et al., 2009).

The care that the potted plant needs is simple, it should be planted and taken outdoors, in summer it should receive good sunlight on all its leaves and in other seasons, it can also be exposed to full sun, the soil should always be in moist conditions because its flowering and fruiting depend on sun exposure.

It is a plant that requires excessive water consumption. It should be watered daily during the hot season (summer) and sometimes it must be watered several times a day to maintain humidity. In the cold seasons it is important to make sure that the soil is not completely dry, because in winter if the soil is too wet it can cause fungi that can kill the bush.

The maintenance of the plant is easy, it can even be pruned with scissors, starting by cutting the branches that are deteriorated, but it should not be pruned too much because it usually removes the branches that come with good wood for the growth of the fruit.

To achieve a dense foliage, pitanga in hedges can withstand intense and continuous pruning; pruning is easy, it can be done with scissors, start cutting the small branches, those that are not even to avoid the indiscriminate growth of the plant, also with pruning the new wood where the flowers appear is eliminated (Griffi’s, et al., 2009).

After being pruned as a shrub, the pitanga is cultivated as an ornamental plant in parks and gardens.

Bonsai is a word of Japanese origin that literally means bon = tray + sai = to cultivate (although etymologically it comes from the Chinese term penjing or penzai, meaning pén = tray + zāi = plant) which consists of the art of cultivating. trees and plants, reducing its size so that it is much smaller than its natural size by means of techniques such as transplanting, pruning, wiring, clipping, etc., and giving it its natural shape but in miniature. For this effect it is necessary to pot the plant. (Díez and Blázquez, 2015).

As the pitanga is a tree, it should be grown outdoors, preferably in soil, and then potted so that it can be worked as a bonsai. Ideally, it should be left to grow for about three years before being potted. The transplant of the pitanga bonsai should be done every two years, always in the spring season and being a tropical plant the pitanga requires abundant sun, once it adapts to the pot on the other hand, you must be aware of the soil substrate, because if it does not have enough nutrients, this plant will grow and can be worked as a small tree, but it will never emit fruits.

Among the care of a pitanga Bonsai, the tools that will be used for pruning must be taken into account. This tree resists pruning very well, therefore it is the best way to shape it. It requires a lot of sun to grow in a healthy way.

The flowers are white, long and abundant; they are formed on a base of two branches, are composed of 4 to 8 hermaphrodite flowers, this tree usually blooms in the spring and summer, its flower is white, its petals, which are 7, have a length of 2 to 3 cm long, are very thin, with whitish stamens numbers.

The flowers are softly perfumed; these are composed of 4 oblong-elliptic sepals of 2.5 to 4.0 mm, the corolla is formed by 4 petals, free, cream-white, thin, oval and measure between 6 to 8 mm in length. The flowers have dozens of stamens, being the stamens of a yellow color. have abundant pollen. Its ovaries are smooth with 8 protuberances. (Sanchotene, 1985).

When winter arrives, both the flowers and the leaves of this tree turn beautiful and give a white to reddish color. Its flowers are medicinal, these allow to soothe stomach pain, sore throat, muscle pain, headaches among others (Vignale, et al., 2018).

✅ Pitanga leaf tea What is it used for?

Studies reveal that the Amazonian aborigines used the pitanga leaf as a digestive and anti-diarrheal drink, just by chewing its leaf or as an infusion. Because the leaves contain an alkaloid called pitanguine, a substitute for quinine, with antifebrile, balsamic, antirheumatic and antigout properties.

It is a species widely used in folk medicine, for the aforementioned are attributed to the leaves a digestive and general toning action of the system. They use it in the manner of coca, which are chewed after meals or at any time during long walks, to give energy (Dime benefícios, 2018).

The leaves can be used as insecticides when spread on the ground in areas where flies abound, since when crushed they release a resin that repels them.

The plant has great diuretic properties, anti diarrheal, digestive, and is also used for throat conditions such as infections, and is also used to solve gastrointestinal problems, cough suppressant, to call cough, serves as a hypotensive because it has the ability to reduce blood pressure, because it has beta-blockers, is an ideal antispasmodic, antirheumatic, astringent, depurative among other benefits for its properties.

Among the most important properties of the pitanga fruit we can mention the following:

This fruit contains a lot of liquid, i.e. 90% of this fruit is composed of water, which is ideal to help or contribute to the perfect hydration of the body.

It is used to lose weight since it is low in calories, this fruit is the best option to include in hypocaloric food plans, that is to say, to lose weight.

A fragrance with a new natural ingredient extracted from pitanga leaves. With essential oil extracted from the leaves of the pitanguera, a symbol of the Amazon tropics, this fragrance combines tropical, vibrant and fresh notes.

This fruit as an important source of fiber, allows a better intestinal function, helping to improve and control blood glucose levels, and the decrease or lowering of cholesterol in the blood.

The pitanga contains phosphorus, potassium, magnesium, and minerals that allow a better functioning of the body when suffering from muscle contractions and heart problems.

All the qualities that this fruit possesses were discovered and used by indigenous peoples. Besides being used in gastronomy, it is also used in natural medicine. Some indigenous ethnic groups believe that the pitangueira leaves have a mystical value.

These leaves have been widely used in the religious cults of candomblé (of African origin) and umbanda (urban Afro-Brazilian spiritualism) and also to cover the floor of spaces and streets at the time of processions, as well as on holidays (Noemi, 2018).

From the fruit of the pitanga we take advantage of the properties of vitamin A, B1, B2, B3 and C. and the essential oils for the manufacture of creams, soaps, colognes and cosmetics, both for skin care, hair care and personal care.

This led to the creation of the Pitanga Natura which is estimated to have been around 2010 which belongs to the Brazilian perfume and cosmetics brand Natura, founded in 1969 with the purpose of taking advantage of the active principle and its natural perfume of this fruit (Natura, 2019).

As the fruit has vitamin C, there are many benefits for the skin, such as keeping the skin soft and having almost all water allows the skin to be more hydrated and without dryness.

Also for the treatment with this fruit in the care of the skin is used the extract or oil of the pitanga, due to its nutrients usually remove impurities and premature aging due to long exposure to the sun, which moisturizes and leaves it soft, firm and scented with a pleasant smell of the fruit.

The properties of this fruit, especially the high content of tannins, are ideal to help hair growth and give more strength to the hair.

It is beneficial for the entire immune system because it has vitamin C, is ideal for strengthening the immune system, managing to prevent infections throughout the body.