The medicinal fruits of the Amazon are many more but here we bring you a selection as an appetizer.

Sometimes it is not the fruit or seed that has medicinal uses but other parts of the plant such as the bark, roots or leaves. If you are interested in learning more about medicinal plants of the Amazon , we recommend you visit this section to expand your knowledge.

However, in this section we will limit ourselves to mention and give a brief description of 5 Amazonian fruits that have been given medicinal uses.

The power of the medicinal fruits of the Amazon:

We all know that fruits have nutritional properties, but did you know that some fruits also have healing properties? Medicinal Amazonian fruits are many and the number will surely increase as their use and commercialization grows.

Below you will find a sample of some medicinal fruits of the Amazon that can serve as: antirheumatic, antidiarrheal, antispasmodic, healing, anti-inflammatory, antithrombolic, fibrinolytic and anti-cancer among many other applications.

This fruit has different names in the different countries of the Amazon region: in Colombia and Venezuela it is known as guama or guamo, in Ecuador as Guaba or Guava (not to be confused with the term “guava” in English), in Bolivia as pacay or “monkey tail” and in Brazil as inga (inga-cipo, inga-de-metro).

There are about 200 varieties of guama or guaba, a tree of the Inga genus. In the Amazon, the so-called guabilla (I. marginata), the Inga fastuosa, the “monkey’s tail” and the I. Nobilis, which in the region is called “river guaba”, are common.

Outside the Amazon, other varieties of this plant are also found on the coasts.

This Amazonian fruit is used as an antirheumatic and antidiarrheal, anti-inflammatory, antithrombolic, fibrinolytic, anticarcinogenic and anti-cancer.

Pineapple, known in Brazil as pineapple (a word of Guarani or Caribbean origin), is native to the Amazon, but according to experts, it was not like the pineapple we see in the markets today.

The native pineapple was smaller. Its average size with which we identify it today is the result of its cultivation in greenhouses by the French and English in the 18th century and subsequent genetic modifications.

Pineapple contains an enzyme called bromelain which is an excellent digestive that serves to soften meats, fight intestinal parasites, reduce tumors, fight cancer, as an anti-inflammatory, antithrombolic, fibrinolytic. On the other hand, green pineapple juice is known to be astringent and anthelmintic.

This little known fruit native to the lower Amazon is also called nina caspi, huiña, caspi or trapiarana, apart from being an excellent source of fiber, an antioxidant and natural sweetener, it is used for various medicinal purposes.

This Amazonian fruit is used medicinally for:

Prevent degenerative brain diseases (Alzheimer’s disease): some studies have proven its effectiveness in reducing inflammatory markers in the brain(interleukin-6), a protein associated with Alzheimer’s disease.

Other research claims that eating this fruit weeks before delivery helps cervical dilatation, is beneficial for natural childbirth and for avoiding induced labor.

The economist and historian Rafael Cartay, points out in his Dictionary of Amazonian Cuisine that this fruit is also used to combat tumors among other ailments.

Unfortunately we have not been able to get a site online where to buy this fruit or as a medicine.

Guarana is a fruit native to the Amazon also called cupana or paulina. Guarana juice or soft drink is very popular in Brazil.

All about Guarana, the most sought after fruit in the Amazon: scientific name, taxonomy, properties, medicinal uses and more.

The seeds of this fruit, very famous for its aphrodisiac or stimulant properties, also have medicinal uses.

Properties and/or medicinal uses of guarana:

After drying the seeds (without the vegetal tissue that covers them or tegument), roasting and grinding them, a powder is obtained that is used as a stimulant, against arteriosclerosis, as a vasodilator or as an astringent to combat bleeding, passive hemorrhages or chronic diarrhea.

Guarana products for medicinal use

Guarana seed powder can be consumed directly. The indigenous people prepare sticks in a cocoa form and, in the pharmacological industry, extracts are obtained in capsules or syrups.

The jagua, yagua or huito is a tree native to northern South America and is found in both the upper and lower Amazon rainforest. 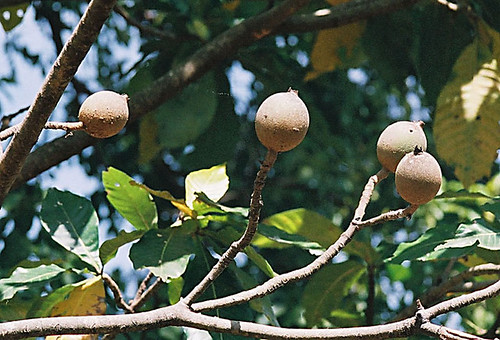 In addition to its food and medicinal uses, it also has cosmetic and insecticidal uses.

Medicinal properties of this Amazonian fruit:

Jagua is recommended for rheumatism, bronchitis and as a dental anesthetic.

The jagua for temporary tattoos

Nowadays, its use as a pigment has become popular, to elaborate temporary tattoos or tattoo.

Jagua rivals henna in the temporary tattoo market since the latter tends to look brown or reddish while jagua-based pigments look black.

The cacay or metohuayo is a very tall Amazonian tree, it is said to reach up to 40 meters in the wild.

In Ecuador it is known as maní de árbol or ñambi, in Colombia it is also called inchi or tocay, while in Venezuela it is called palo de nuez, nuez de Barquisimeto or taque.

The fruit of the Caryodendron orinocense is gelatinous and contains an almond that tastes like peanuts and from which the indigenous people extracted an oil that they used for medicinal purposes.

It has now been determined that cocoa bean oil has many beneficial nutritional properties for facial care, such as: vitamin A, C and E, antioxidants, minerals (copper, iron, manganese, zinc, potassium), alpha linoleic acid/linoleic acid and omega 3, 6 and 9.

Cacay oil is currently used in medicine in the area of cosmetology.

It is ideal for moisturizing, softening and nourishing the skin, eliminating wrinkles, stretch marks and scars.

It is compared to rosehip oil, claiming that it has 3 times more retinol (vitamin A) than the latter.

It is also compared to argan oil, highlighting that it has 50% more vitamin E and twice as much linoleic acid.

Where to buy cacay oil online?

Today, the extraction of cacay oil for cosmetic use has been industrialized and is available on the Internet.

As often happens with fruits, and more so with fruits that are not as common as many Amazonian fruits, the fruit of the Muntingia Calabura also has many names.

But before listing its “pseudonyms” it should be clarified that it should not be confused with another plant that, apparently, in Mexico is also called capulin and is another whose scientific name is Prunus salicifolia.

This fruit, which in Ecuador is called chitato (majagüito, acuruco, chirriador or nigüito), is also known as yumanasa in Peru. As it resembles a cherry it is also called a cherry elsewhere but this is not a good way to identify it as it tends to get confused.

Medicinal uses of the fruit of the chitato or mutingia calabura:

The leaves, bark, roots and flowers have many other medicinal uses, but here we will limit ourselves to mentioning the medicinal uses of the fruit.

According to an article published by CONABIO (National Commission for the Knowledge and Use of Biodiversity), it is said to be an antitussive, to treat bronchopleural affections, as well as to alleviate amenorrhea, diarrhea and dysentery.

According to the Dictionary of Amazonian Cuisine written by Rafael Cartay, this same plant is also used as an antispasmodic, healing and sedative.

Many more medicinal fruits from the Amazon:

As you can imagine the medicinal fruits of the Amazon are many more. Below is a list of links to specialized articles summarizing the healing properties of Amazonian plants and fruits:

Sarrapia (Diphisa punctata): characteristics, where is it found in the wild, by-products, other industrial uses.

A true story, the subsequent sensations, the perceived changes, and their influence on the appreciation of the world.

Testimony of a ceremony with ayahuasca where the expected result was not achieved.