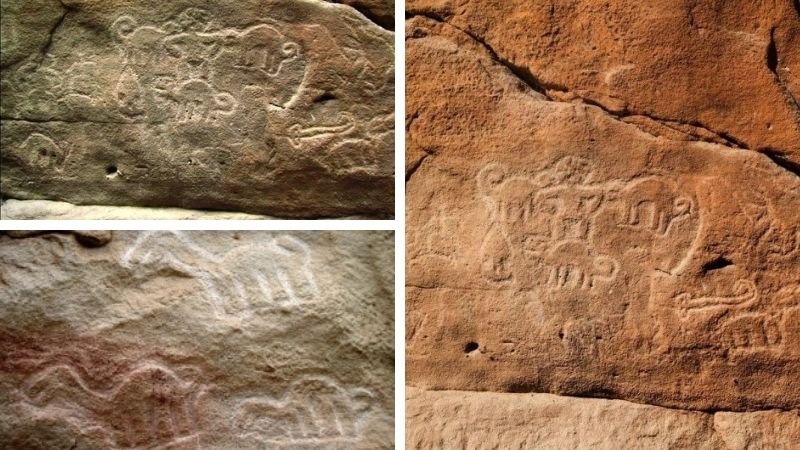 It is classified in the category of cultural manifestations as an archaeological site of rock art, being the basis of observation tourism, archaeological, anthropological and related studies and research, photography and filming (Alva Cruz, 2010).

Probably the name of this locality, Pitaya, is linked to the presence of the endemic cactus plant with edible fruit in the Utcubamba valley, cataloged as a promising fruit of the Amazon.

Studies on rock art in the department of Amazonas in Peru are insufficient and, consequently, it is imprecise to speak of the chronology of the petroglyphs, even when it is linked to the activities carried out by the first settlers of Chachapoyas.

However, according to Ruiz Estrada (2016), the La Pitaya petroglyphs were made in pre-Hispanic times, corresponding to the late intermediate period (10th to 15th centuries AD).

Scientific Research in the Pitaya Petroglyphs

Henri and Paule Reichlen made an initial mention of these petroglyphs in 1950, without specifying further details but they reported “…a group of cave engravings called Kaklic, which is actually the site of La Pitaya, with ‘characters, felines and camelids’ …”

Later, Hans Horkheimer describes them as “…engravings that are found “…not on several isolated rocks like other petroglyphs in Peru, but rather ‘are aligned on a single wall’ of sandstone preceded by a platform.

Description of the Pitaya Petroglyphs

Indeed, these are stone engravings of carved figures with anthropomorphic features and symbols.

Among them drawings of people with a kind of headdress, representations of the Amazonian flora and figures of animals similar to dinosaurs, birds, crabs and snails, arrows, abstract designs, among others.

They are on a rocky concavity that reaches a height of approximately 3 meters in an area of 100 m2 (Alva Cruz, 2010).

La Pitaya is located on the right bank of the Utcubamba River (a Quechua word that in Spanish means cotton pampa), 20 km from the city of Chachapoyas.

How to get there

To get to the petroglyphs of La Pitaya, the starting point is the main square of the city of Chachapoyas, then following the paved road that leads to the intersection with Leymebamba (Chamaque), from there you go through the town of Caclic until finally arriving to La Pitaya. Access to the petroglyphs is free (Alva Cruz, 2010).

It is important to promote the conservation process of this rock art site, as well as the corresponding valorization as ancestral cultural heritage of the Peruvian Amazon region.