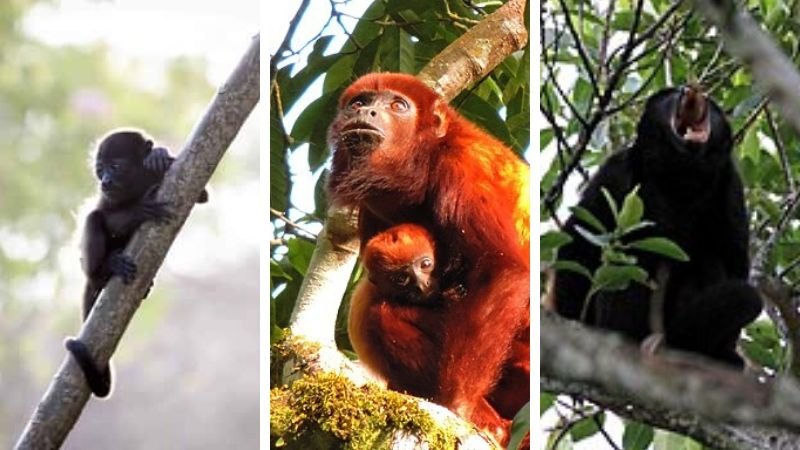 The howler monkey(Alouatta spp.) is one of the best known primate species in the Neotropics. Being one of the largest primates in body size, they are the second heaviest after Brachyteles (Zingenser, 1973).

They have a wide distribution ranging from the northern Colombian Andes to southern Bolivia. It is found from 0 to 2300m altitude, with records up to 3200m.

For this reason, it is said to be a very versatile species, using different types of habitat and can survive in logged forests and small fragments (Schwarzkopf and Rylands, 1989).

Despite the recognized ability of this species to withstand habitat fragmentation and intervention, however, its presence does not guarantee the long-term stability or viability of its populations (Rylands and Keuroghlian, 1988).

They feed mainly on leaves, especially new leaves as they are softer and have higher protein levels than mature leaves. They also consume large quantities of fruits and, to a lesser extent, buds and flowers. Of all the neotropical primates, these are the slowest and most sedentary.

Why is the Alouatta known as the Howler Monkey?

They are called howlers due to the sounds they produce thanks to the development of their hyoid apparatus that forms a resonance cavity, which is evidenced by their bulging throat. This adaptation allows them to emit their powerful howl, described by Félix de Azara (1960) as “loud, sad, hoarse and unbearable”.

The howls produced by males at different times of the day may be for different reasons, such as to announce dawn, to announce a storm, or to announce the temporary passage through a territory.

They also use the howl to intimidate potential natural enemies, to attract females or to maintain hierarchy over their group. Females also howl, but their howls are shorter and less loud.

The genus Alouatta has traditionally been included in the family Cebidae (Hershkovitz, 1977). However, according to recent molecular research, a kinship of Alouatta with Ateles, Brachyteles and Lagothrix (subfamily Atelinae) has been revealed. Therefore, howlers are currently classified in the family Atelidae (subfamily Alouattinae or Mycetinae) (Defler, 2003).

The taxonomy of the genus Alouatta is still in dispute; it currently includes nine species: A. palliata, A. pigra, A. belzebul, A. fusca, A. caraya, A. coibensis, A. guarida, A. nigerrima and A. seniculus (Rylands et al., 2000).

Subsequently Groves (2001; 2005) proposed 10 species, with A. macconelli and currently the number of recognized species was raised to 14 by Rylands and Mittermeier (2009), based on the work of Gregorin (2006) in which by coat coloration was elevated to full species status to: A. discolor, A. ululata A. juara, A. puruensis.

This species is distributed from the north of the Andes in Colombia, starting from the western cordillera to the east and south, and includes Venezuela, the island of Trinidad, eastern Guianas, northern Brazilian Amazonia, Ecuador, Peru and western Purus in Brazil and Bolivia (Emmons and Feer, 1997). In a wide range of habitats including secondary, gallery, tropical rainforest, savanna and Andean forests (Hernández-Camacho and Cooper, 1976).

Alouatta ssp. is one of the species that occupies all altitudinal levels of the mountain ranges up to 2,300 m. In this latitudinal range, they can be found in different types of forests, both in lowland and mountain forests, up to 3200 meters above sea level (mountainous regions located above the cloud forest level) and the Sierra Nevada de Santa Marta (Hernández-Camacho and Cooper, 1976), which highlights their great adaptability to diverse natural environments (Neville et al., 1988).

Howler monkeys have a frugivorous-folivorous diet, ingesting fruits and foliage in proportions that vary geographically and seasonally, but frequently the proportion of foliage in the diet is 50% or more (Neves and Rylands, 1991).

Due to the high intake of foliage, which is slow to digest and provides little energy, they rest on branches in shady trees. This allows them to digest slowly and assimilate nutrients more efficiently (Stevenson et al., 2000).

Their strategy consists of minimizing the time spent in movement, moving through routes directed to their feeding trees.

On the other hand, it is well known that howler monkeys are important seed dispersers of tropical trees and commonly influence the distribution and composition in forest remnants (Chapman, 1989; Zunino, 2001).

Napier and Napier (1967) described the genus as follows: “In all species, the face is naked and deeply peppered. The nostrils are close together. They have a swelling under the chin with the capacity to accommodate the very specialized larynx. It is below the beard of males and is more prominent in males than in females.

Its body is stocky, with a somewhat bulging abdomen. They have long and abundant hair. Its head is large in comparison to the body, small ears, flat nose, wide, round and flat nostrils, dark brown eyes. Their jaw is prominent with a large mouth, on the chin they have a chin with long hairs.

Their arms and legs are relatively long and strong. Their hands have five elongated fingers, with a well-developed, non-opposable thumb and human-like nails. The tail is long, prehensile, with a bare pad on the underside near the tip.

They are social animals that form groups that generally contain more adult females than adult males (Rudran, 1979). These groups must have an appropriate size in order to maintain a stable formation (Carrera-Sánchez et al., 2003).

According to Strier et al. (1993), the development of subgroups may be the first step towards group fission. A common characteristic within the genus is that both sexes can disperse from the natal group (Rumiz, 1990).

They are monkeys that live in unimacho or multimacho groups with individuals of different sex-ethnic classes (Rowe, 1996). Group size can vary between 2 and 22 individuals depending on the species, although solitary males are also observed.

The hierarchy among males depends on the size of the group and hierarchy may occur among the 28 females. Emigration from the natal group is more common in males than in females and varies according to species (Rowe, 1996).

Reproduction does not have a defined season; it can take place at any time of the year. The gestation period is about 186 days, after which the female gives birth to a single calf weighing 0.4 kg.

The mother carries her young for several months until the young monkey learns which species of plants are edible and how to move safely through the vegetation.

Females reach sexual maturity at 36 months and have their first calf between 40 and 46 months. Males reach maturity between 42 and 48 months.

During estrus, it is the females that approach the male, who sniffs her genitals and tastes her urine. Usually only the dominant male copulates with females.

Is the Howler Monkey in danger of extinction?

In the face of the local disappearance of certain primate species, the genus Alouatta has demonstrated that, in the face of many fragmentation factors, it is one of the primates with high behavioral and feeding strategy flexibility, and it has been reported that it can survive in very small habitats, up to 0.5 ha (Bicca-Marques and Calegaro-Marques, 1994).

Therefore, it could be predicted that howlers adjust their behavior to accommodate different feeding strategies in these disturbed forest habitats.

The IUCN in its 2011 revision of the Red List, considers the species to be of “Least Concern” (LC), however, the subspecies A. p. aequatorialis is listed as vulnerable (VU). This species is also threatened by hunting and is also used in some parts of the country as a pet.

It is also part of the diet of some indigenous groups. This has led to its inclusion in Appendix I of the Convention on International Trade in Endangered Species of Wild Fauna and Flora (CITES).

Neves, A. M. and A. Rylands. 1991. Diet of a group of howling monkeys, Alouatta seniculus, in an isolated forest patch in Central Amazonia. Acta Primatologica 3: 263-274. PDF

Rylands, A. and A. Keuroghlian. 1988. Primate populations in continuous forest and forest fragments in Central Amazonia. Acta Amazonica 18 (3-4): 291-307. Source

Rylands, A. B., R. A. Mittermeier and E. Rodríguez-Luna. 1995. A species list for the new world primates (Platyrrhini): distribution by country, endemism and conservation status according to the Mace-Land system. Neotropical Primates 3 (suppl): 113-160. Source