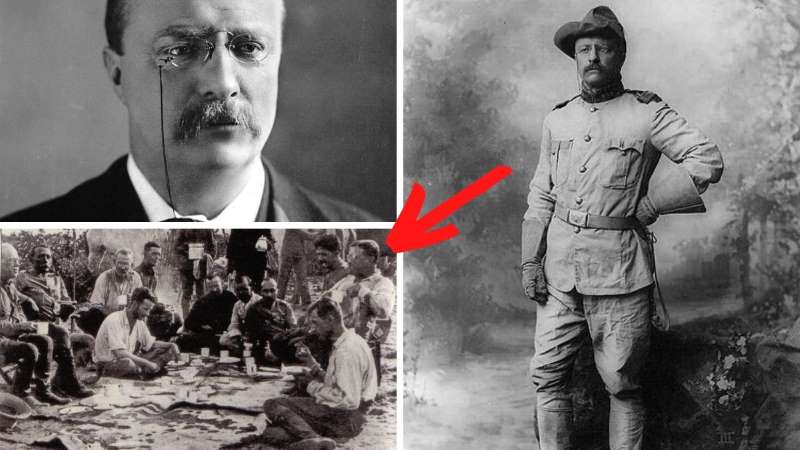 Theodore Roosevelt (1858-1919), the twenty-sixth president of the United States, was like a force of nature. A flame that was extinguished, early, at the age of 61.

His family and people called him the lion. When he died, in 1919, one of his sons wrote to a brother: “The lion is dead”.

One fact is enough to give an idea of this indomitable force.

February 12, 1884 must have been for him one of his most fateful days, if not the most.

That same day his mother died of typhoid fever and, eleven hours later, his wife died of kidney failure, having given birth to their daughter Alice two days earlier.

A double tragedy difficult to bear for a sensitive human being.

However, in his diary he wrote only a big X that day, and thereafter he never spoke of the huge losses again, not even in his autobiography.

He retired to a farm in North Dakota to be a cowboy, to read history and literature books to slowly assimilate the misfortune. He then entered politics, joining the Republican Party.

He reached the vice presidency of the country, step by step, passing through high positions as a member of the House of Representatives, governor of New York, and vice president of the Union.

An assassination attempt ended the life of President Willliam McKinley and he, as vice president, ascended to the presidency of the country. He then won the presidency by election (1904-1909).

During his presidential term he acted inwardly, like a lion, against political corruption and economic monopolies.

During his presidential term, he filed lawsuits under the Sherman Antitrust Act of 1890 against 44 large companies, including the Standard Oil Company and the American Tobacco Company.

He was then called a trust buster, a hunter or destroyer of monopolies.

It laid the foundations for consumer protection and created programs of social coverage and protection against the threat of financial groups.

But outwardly, in U.S. foreign policy towards Latin American countries, the backyard, it became a kind of piranha, initiating a policy of expansionism and interventionism.

Under the Monroe Doctrine, he applied a modification known as the Roosevelt Corollary, which justified the intervention of these countries when “repetition of wrongdoing or impotence” was observed.

At that time, the region was a great center of corruption and personal political ambitions of the local rulers, with no concern for the welfare of the dominated peoples.

The United States, in its new role as international policeman, inaugurated a policy of interventions in the internal affairs of its neighbors, which began with the intervention in Panama, then a Colombian department, to control the Panama Canal under construction.

Later, U.S. forces intervened in the Dominican Republic, Cuba, Haiti and Nicaragua. It was the manifestation of the Big Stick policy: Speak softly and carry a big stick, you will go far.

Abuse of power or the good sense of the use of politics and international justice?

The Roosevelt corollary makes this clear:

“If a nation demonstrates that it knows how to act with reasonable efficiency and with a sense of social and political expediency, if it maintains order and respects its obligations, it need not fear an intervention by the United States.”

From a piranha, Roosevelt turned back into a lion, who used an ecological and ethical sense of political performance among his neighbors who preyed on their people without regard, sunk in the deepest corruption.

He left power in 1909, leaving as his successor his co-party W.H. Taft, who did not follow his political line at the national level.

He then tried, in 1912, to return to the presidency, but was defeated in the elections by the Democrat Woodrow Wilson, before the split of the Republicans who presented two candidates: Taft, for reelection, and he, for the modernizing current.

An environmentalist from other times… 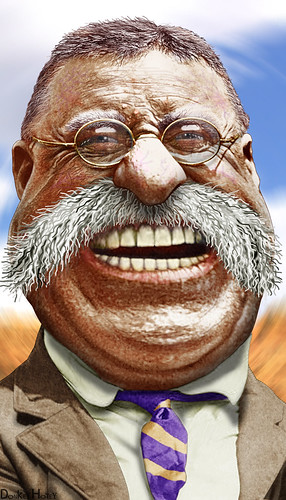 Roosevelt was a lover of nature conservation and, contradictorily, of hunting and safaris.

That trip lasted almost a year, and they returned bringing back 11,400 wildlife specimens, ranging from an insect or plant not recorded by science to an elephant for the Natural History Museum.

Professional explorer Ever Gómez Berrada, recounts, in chronicles from 2015, that Roosevelt, in his element, was amused like a child, collecting game from some 500 big game, including 17 lions, 11 elephants, 11 black rhinos and 9 white rhinos.

Weapons and books made up most of his luggage on the great African safari.

Roosevelt in the Amazon

Ten years later, he embarked on another great adventure, even more difficult than the first. Now he was going to venture into the Amazon jungle, and almost died in the attempt. 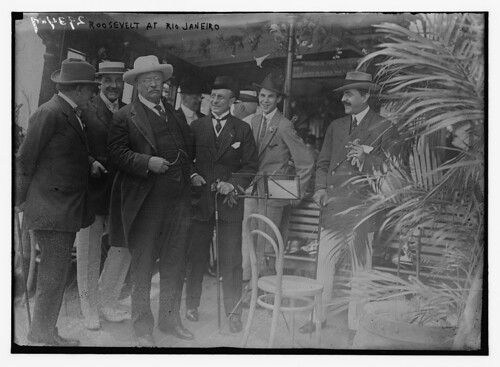 After being defeated in the presidential elections of 1912, and looking for new airs, he undertook a tour in favor of Pan-Americanism in Argentina and Brazil.

Already in Brazil, he arrived in the Amazon, to begin his Amazonian history.

In 1913 an expedition set out for the La Duda River, financed by the American Museum of Natural History, leading Theodore Roosevelt, his son Kermit, almost a replica of Theodore (soldier, explorer, businessman, writer and Harvard graduate like his father), who always accompanied him on his travels, and the legendary Brazilian explorer, military and cartographer CÁNDIDO RONDON, who had discovered the “La Dúvida” in 1909, but without mapping it and without establishing the location of its mouth.

The 19-member expedition was both a success and a disaster.

A success, because the objectives were achieved: to trace the entire course of the river, to navigate it all along its course, through strong rapids and impassable waterfalls, moving heavy canoes, and to locate it on the map.

But it was also a disaster, because the members of the expedition got lost in the jungle, ran out of provisions and had to split up to continue.

Most of them fell ill, among them, perhaps the most was Roosevelt.

Of the original 19 members, only 16 made it out alive: one was killed, and the assassin fled and disappeared in the jungle (before Roosevelt shot him), and the third died drowned in the river rapids.

Roosevelt was wounded in the leg, which became infected, and contracted malaria.

Nevertheless, they survived, established contact with belligerent Indians, such as the MANBIKWANA, and other hostile local tribes, and Roosevelt was able to satisfy his passion for hunting, recalling his past safari in Africa, although in this Amazonian adventure he suffered greatly and lost more than 20 kg of weight.

Someone said, “It was not a pleasure trip. Only good fortune allowed him (Roosevelt) to live to tell the tale.”

One remembers his phrase when he suffered an assassination attempt in 1912: “The worst of all fears is the fear of life”.

The legacy of a great journey

Of that experience he wrote a book, of the thirty or so he wrote (as he did of his safari in Africa, let’s not forget that he was a historian).

The book “Through the Brazilian Wilderness” was a best seller in 1914, and a model in the literary genre.

The trip was also made into a documentary called “Into the Amazon”.

Roosevelt tells in his book that he killed many jacares(Melanosuchus niger), the Amazonian black caiman, the only living species of melanosuchus, by putting the bullet, he says, between the eyes of those saurians that were an easy target because they did not move, since they had “insensitive nerves”. Cacé, says the book, “countless of these noxious amphibians“.

And the fearsome piranhas were not spared from his description:

“They will tear off the finger of a hand by slipping carelessly into the water; they mutilate swimmers, (…) , they will tear and devour any wounded man or beast, because blood in the water excites them to madness.”

Several things came out of those tough and risky safari experiences.

One was his reencounter with nature, important for him who was a great conservationist of natural resources, despite his love of hunting, one of his great passions.

Another was the reencounter with a hard and risky life, such as the one he had at the head of the Rough Riders battalion, “The hard riders” in Spanish, who fought in the Spanish-American war in Cuba in 1898, and from which he returned to his country to be acclaimed as a hero.

As a reminder of those unusual expeditions, not exempt from dangers and displays of bravery, in which a president, in the first one, and a former U.S. president, in the second one, participated without the special custody that usually accompanies them wherever they go, and especially when traveling to such a risky and unknown place as the Amazon.

However, many did not believe what he said in his book about the Amazon, nor the veracity of his expedition.

The evidence was in a film that was poorly shot, and with many flaws.

It was filmed by explorer Anthony Fiala, but was a failure.

The explorer Henry Savage Landor, of some fame in the field, questioned whether Roosevelt had reached the headwaters of the La Duda River.

“Mr. Landor is a ridiculous, perfectly absurd, and no serious scientist would think of accepting him as anything more than a buffoon, rather than an explorer .”

Verification of their controversial findings

Two expeditions were made to verify the truth of their story. One, in 1927, led by the British explorer George Miller Dyott, the same one who was in charge of searching for the English explorer P. H. Fawcett, who was never heard from again (See: Adventurers after the lost city of Z).

Dyott recorded with his camera the entire route traveled by Roosevelt on his trip.

And those new images were edited and incorporated into the original film, the parts that were saved, which was screened in 1928.

The second expedition was led in 1972 by Charles Haskell and Elizabeth Knight and a select team of 19 research scientists, including Tweed Roosevelt, a grandson of the old lion.

Both expeditions confirmed the veracity of Roosevelt’s account, stating for the record that they do not know how the group survived under the conditions they faced at the time.

The second, very well equipped, with specialized guides, took 33 days to complete the route of the original expedition, and had to overcome great difficulties.

That expedition verified, in detail, the accuracy of the findings of fauna and flora specimens collected by Roosevelt and his son on that trip.

On the two safaris he went on, he always had a few selected books with him, books he read religiously every night: works by Shakespeare, Cervantes, Dante, Homer, Mark Twain, Tennyson, Poe.

That was Roosevelt, an admirable man, who lived life as a whirlwind of energy.

It reminds me of the joie de vivre and safari passions of another character, a famous American, a Nobel laureate like Roosevelt: Ernest Hemingway, who committed suicide because he could no longer live life his way.

The posthumous judgment of history elevated Theodore Roosevelt to the status of one of America’s greatest and most courageous statesmen.

In 1906 he received the Nobel Peace Prize and, strangely, the Honorary Doctorate from the Autonomous University of Mexico in 1910, in a Latin American region that censured him for his interventionist political actions.

He could have said, when dying, felled by a pulmonary thrombosis, as he did on the occasion of an attempt on his life, in which he was slightly wounded: “…”.No man has had a happier life than I have had. A happier life all around“… Despite having lived through and overcome great tragedies.