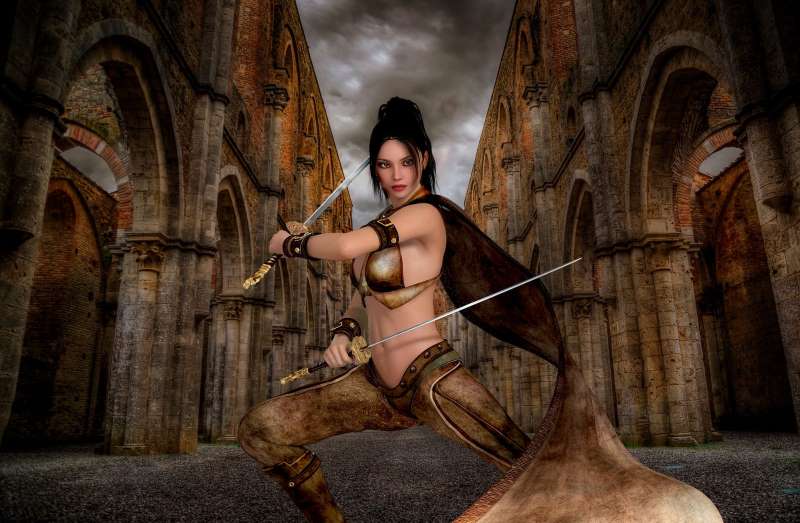 The mythology surrounding the legend of the Amazons dates back to the days of ancient Greece, who described them as a tribe of fearsome warrior women, always ready for combat, descendants of Ares himself.

They were part of an all-female society that lived on an island to the north of Asia and south of today’s Russia. Some call this island Themyscira.

Very occasionally they procreated with clansmen or tribesmen near their domains, keeping and raising the girls exclusively.

In the case of children, they were killed, enslaved or handed over to their parents.

Women of the future

A feminist scientist decides to make the utopian world of an American writer of radical feminism a reality: a society where women dominate everything and men practically do not exist.

Meaning of the word “Amazon”.

The meaning of the word amazon itself is currently unclear, but two possible meanings may converge.

The first is bustless, based on the ancient Greek belief that the Amazons amputated the left breast of each female infant in her developmental stage so that she could more nimbly master the bow and arrow.

Another possible version of the origin and meaning of Amazona is sin pan or sin granos, referring to its possible meat-based diet, due to its hunting nature. That is, they did not consume bread.

However, there is also the version that Amazona may come from the Persian word ha-mazan-warriors which comes from the Farsi word hexiquio-amazacaran which translates as to make war.

In addition to the medieval European adaptation that designates Amazona as manless or husbandless.

Queens of the Amazons – Greek Mythology

1. Hercules and the Queen of the Amazons

In Greek mythology, one of the best known legends about Amazon women arises with Heracles in his Twelve Labors, where he had to get the belt of Hippolyta: the Queen of the Amazons.

When Heracles or Hercules arrived in the territory of the Amazons, the queen decided to voluntarily give him her belt.

However, the goddess Hera turned the rest of her warriors against Herakles, telling them that he had kidnapped Hippolyta, their Queen.

Hercules, believing that he had been deceived by Hippolyta , killed her and returned triumphant to Greece with his belt.

It also highlights the legend of Theseus, who attacked and kidnapped another Queen of the warrior women. The Amazons, for their part, responded like warriors and went on the attack against Greece. They were defeated by Theseus in the heat of a violent battle.

Reference is made to the Amazons in the works of Herodotus and Apollodorus. In the context of the Trojan War, Penthesilea reinforced the Trojan troops with her warriors. Achilles killed her in revenge for Hector’s death but later fell in love with her and regretted killing her.

Women of the Amazon River

In the context of the conquest and exploration of the new American continent in the 16th century, Francisco de Orellana, a Spanish explorer, testified that he confirmed the presence of Amazonian women while he was exploring the Marañón River, which is why, it is inferred, he subsequently named it Amazon River as a tribute to the brave women warriors.

4. Amazonian women and the myth of El Dorado

Another legend that eventually gained fame among conquerors and explorers was that the Amazon warrior women were the guardians of the lost city of El Dorado, a mythological city made entirely of gold and which is probably somewhere in the Amazon today.

The female warrior or Amazon is also the possessor and custodian of great wealth, thus confirming the fears of medieval Europe about female superiority, both in power, wealth, strength and freedom.

This merged with the American Indian imaginary, finally giving the idea that the American Amazons were naked women, who had power over the river and its surroundings, as well as possessing magical powers that frightened as well as fascinated.

5. The Amazon women according to Walter Raleigh

Raleigh describes them as warrior women, cruel and merciless with an insatiable thirst for blood and particularly against men, as well as protectors of their domains where men cannot penetrate, especially in the northernmost geographical areas.

Raleigh pointed out in his chronicles that the exploration and conquest of what is now the Amazon should be postponed and that women should be available to face these warriors with the intention of conquering the territories inhabited by them.

6. The Amazons of Christopher Columbus and Marco Polo

These women were a latent idea in the mentality of the conquistadors and travelers to the new world. In their imagination, Amazonian women not only lived in Asia or Europe, but also in America.

They are already referred to in the chronicles about the first voyage of Christopher Columbus, in the entry of January 16, 1493, in a version analogous to the one in Marco Polo where it is pointed out that the aborigines of the Matinino islands claimed that there was an island populated only by women.

7. The Amazon women of Hernán Cortés

By the year one thousand five hundred and twenty-four in his IV letter of relation Hernán Cortés addresses his majesty King Charles V, where he refers to a new version of the myth of the Amazons.

Cortés located them north of the Valley of Mexico, where he described an island populated exclusively by women. In her description she was uniquely suited to the classical account of the Amazons.

However, Cortés’ essential interest was not precisely to discover the Amazons themselves, but rather to seek and obtain the great riches that, according to indigenous accounts, these mysterious women possessed.

8. The Amazon warrior women according to Fray Gaspar de Carbajal.

Fray Gaspar de Carbajal refers to the feminized jungle as Amazons in itself, referring to the Amazonomaquias, or combat against the Amazons that every Greek warrior had to win.

In their description they are very beautiful and courageous women, versed in the handling of the bow and arrow as well as other warlike resources, born warriors, very tall, totally white and with lean meats; very long hair and who shamelessly exhibit their “embarrassments” in a natural way. Waging war each in the equivalent of 10 men.

In addition to intertwine in his stories, the mythical, the magical and even the fantastical.

As for example in Ayraza’s text (2007), about Queen Coñori, Queen of the Amazons, who dwells in five different houses where she is worshipped among idols of silver and gold.

She is also a Sorceress-Queen, the most powerful of all. It can be transformed in the natural phenomena present in the forest and also in the animals that inhabit these geographical spaces.

This is undoubtedly an approach to the conception that the conquerors had of the Amazons that were perhaps part of all the magnificence of those lands that overwhelmed conquerors, explorers, adventurers and missionaries.