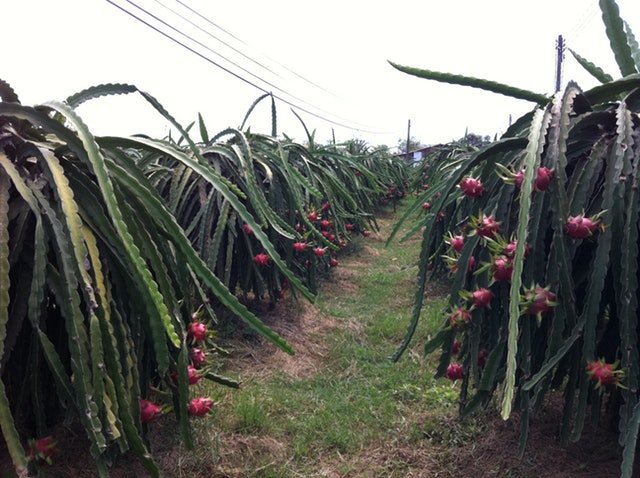 In this article we will teach you how to grow the Dragon Fruit plant. You will learn to differentiate the different species and varieties, the morphological and botanical characteristics of the plant (root, stem, flower, fruit), how it is grown (by seeds and/or cuttings) and finally its disadvantages, pests and diseases.

Products for the cultivation of pitaya

The pitahaya plant belongs to the cactus familyand is known worldwide as “dragon fruit”. Its fruit is sweet and refreshing, as well as rich in fibers, essential minerals, simple sugars (oligosaccharides) and antioxidants such as betalains, which is why its cultivation has currently aroused growing interest as a food, industrial and economic resource.

Origin of the Dragon Fruit plant

This plant with gourmet fruits is native to forested regions of North, Central and South America and is known in Latin America by the common name of pitahaya or pitaya (Esquivel, P. 2004).

In scientific terms, the varieties of this plant are grouped into two genera: Selenicereus and Hylocereus; and the best known and appreciated speciesworldwide are Selenicereus megalanthus (the yellow pitahaya), and Hylocereus undatus, (the red pitahaya or Dragon Fruit) which is the most studied, due to its wide morphological, physiological and genetic variation (Janick, J. 2010).

Since 1980 efforts have been made to cultivate cacti of the genera Hylocereus and Selenicereus.

The red pitaya plant (Hylocereus undatus) is a climber, with triangular stems and pink flowers, although it is more attractive in appearance, the red pitahaya is more delicate and vulnerable to damage in the post-harvest phase (Becerra, 1986).

Within the Hylocereus genus, a total of 14 species are grouped, the most representative being Hylocereus undatus, H. polyrhizus, H. costaricensis, H. triangularis and H. purpusii, traditionally known as red pitahaya.

These are cultivated mainly in Central America (especially in some regions of Mexico) and Israel (Esquivel, P. 2004)

Due to its potential Hylocereus has been introduced for commercial purposes in the Bahamas, Bermuda, the United States (Florida and California), Australia, Thailand, India, China, Taiwan, the Philippines, Malaysia, Vietnam, Indonesia, Cambodia, Israel and other countries. For its part, H. undatus has taken on great commercial value in Southeast Asia (Nerd et al., 2002).

The yellow pitahaya Selenicereus spp., with 20 species (Tel, Z. 2004) are considered species with commercial value in South America in countries such as Bolivia, Peru, Ecuador, Colombia and Venezuela.

For its part, Colombia is the main supplier of yellow pitahaya in the world; then there are Israel and Mexico. The Netherlands, Germany, France and the United Kingdom are the main export countries for Colombian pitahaya (García, M. 2003).

The yellow pitahaya is the one of greatest agronomic interest because its fruits are sweeter than those of the red pitahaya; In addition, they are more resistant in the postharvest stage, especially in transport and storage (Becerra, 1990; García, 2003).

On the other hand, Forero et al. 2008 indicates that the shelf life of the yellow pitahaya lasts four weeks, that is, twice the duration of the red pitaya, which is two weeks.

Botanical characteristics of the plant

Pitahaya plants are made up of a xerophytic, phylloclad, triangular and succulent green stem that assumes photosynthetic functions due to the abundant presence of chloroplasts.

They have three edges, they are concave on the sides, with areoles on their edges, which have groups of spines from 2 to 4 mm, considered as modified leaves (García, M. 2003).

The pitahaya is a perennial, climbing plant, because its stem prevents them from supporting themselves, in their natural environment they use the trunk of a neighboring tree, rocks or in nurseries they use tutors as a support.

Plants that grow in this way are called hemiepiphytes; that is, they grow on the trunk of a tree and their root maintains contact with the ground but they also develop aerial roots to support themselves on the trunk (Rodríguez, C. 2000).

The flowers have the peculiarity of opening only once during the night hours, in a period of one hour to an hour and a half after the sun goes down, and they close approximately six hours after sunrise (Weiss et al., 1994). which is why it is known as “queen of the night”.

Another characteristic of its flowers is that they are hermaphrodite and actinomorphic, they are inserted directly on the stems, they have a tubular shape, they are large (from 20 to 40 cm in length and up to 25 cm in their largest diameter), the male sexual whorl is made up of numerous spirally arranged stamens that produce pollen grains.

The gynoecium ovary is inferior with numerous carpels that extend into a single style covered by scaly bracts.

The sepals are yellow; white, yellow or pink petals (Weiss, J. et al., 1994). This flower, in addition to being showy, has a nectarial chamber, since it exhales a delicate fragrance with the smell of bananas and vanilla, making it very attractive to pollinators.

Natural pollination is carried out by bats that visit the flowers at night, and by bees during the day, attracted by the nectar they produce.

The flowers are trumpet-shaped; at the beginning they are in an erect position and when they open they direct their position towards the light.

Once pollinated, the flowers take a hanging position and last a few hours; the formation of the fruit, from pollination to the harvest stage, takes between 4 and 8 months, depending on the temperature (Becerra, 1990; García, 2003).

It is a globose or subglobose berry (dehiscent in Hylocereus and indehiscent in Selenicereus), it measures on average 8 to 15 cm long and 6 to 10 cm in diameter. Unlike the fruits of other cacti, such as the prickly pear, its fruit does not have thorns, instead it exhibits very showy bracts (Montesinos, J. et al., 2015).

The maturation of the pitahaya fruit is the process where the fruit reaches the sensory characteristics suitable for consumption. This occurs as a result of the deep metabolic and chemical restructuring that takes place during the maturation process and concludes in evident changes mainly in color, flavor, smell, and texture (Alvarado-Romero, 2014).

The fruits complete their development in 39 to 52 days counted from the opening of the flower bud until they reach maturity for consumption on the plant (Weiss et al., 1994). The maturation of the pitahaya fruit begins with a reddish coloration and ends with the fall of the fruit; to avoid the latter, growers harvestat an intermediate stage.

Cultivation or Propagation of Dragon Fruit

Dragon fruit is propagated sexually and asexually by cuttings or grafts; Although the seed has good germination power, it is not recommended, since the plant from seeds tends to degenerate (Becerra, 1986).

According to Gunasena, H. et al. (2010) in the pitahaya, the main form of propagation is vegetative, from the stems, cuttings or cladodes, naturally through the separation of the stems and in the case of cultivated plants, by direct transplantation in the ground. definitive or its placement in bags with substrate until the formation of new stems.

They also reproduce by means of seeds, spread by birds and other animals; fundamentally bats in the case of red pitahayas (Osorio, O. et al. 2001); however, for cultivation purposes, sexual propagation is not recommended, since the plants require too much care while transplanting and take four to six years to reach their reproductive stage (Gunasena, H. et al. 2010)

The importance of pitahaya cultivation is evidenced by the great genetic variability, adaptability to various environmental conditions, productivity, profitability.

It is a crop with great adaptability to environmental conditions, profitable and in demand in regional and international markets.

Becerra (1990) reports that, in the first plantations, the cultivation of pitahaya showed its rusticity; As crops increased, pest and disease problems arose that currently require greater control.

The presence of numerous pest insects is affected by the appearance of some pathogens that affect fruit production, generating preferences in crops.

Pitahaya stem soft rot is a disease associated with two bacteria, which is present in some producing regions of the species H. undatus and H. purpusii.

Bacterial action induces rot after 15 days of its presence in the crop.

The undatus species is the most susceptible, due to the deficiency of Ca and N, which favors the development of the pathogen.

In general, the severity of this condition in pitahaya plants is associated with nutritional deficiencies (Valencia, B. et al., 2003).

Regarding pests and insects, the fruit fly or South American fly (Anastrepha fraterculus Wiedemann) is one of the biggest problems in pitahaya crops.

The damage is caused when the adult oviposits in the flower and when the larva hatches and feeds inside the ripe fruit; the pulp turns brown, being darker towards the outside of the galleries that also form holes in the stem (Becerra, 1990; Rodríguez et al., 1993; García, 2003).

Other insects that negatively affect pitahaya cultivation have also been reported, such as the stem and fruit borer (Lepidoptera, Pyralidae), the stem miner (Lepidoptera, Gracilaridae), Ceratitiscapitata and Anastrephaludens; the arrieras or cutter ants (Acromyrmexocto espinosus) and the fire ants (Solenopsis geminata) (García, 2003).

Other related products for cultivation

Where it is grown, how it is grown, description of pitomba fruit, nutrients, properties, benefits and agro-industrial uses.

Description, characteristics and properties of the fruit, how to grow it, in pots, in bonsai, the flower, what it is used for, leaf tea, in capsules.