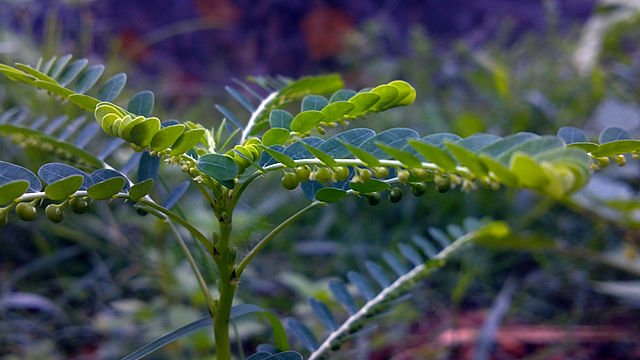 In Amazonian folk medicine there are thousands of medications that are used to cure severe illnesses and ailments. One of the best known, not only in the Amazon basin, but also elsewhere, is the chancapiedra herb, whose cultivation and use has spread throughout the world as the most effective antilithic, that is, a drug used to dissolve kidney and gallstones.

However, according to recent scientific research, rather than breaking (chancar in Quechua) the stones, its infusion relaxes the urinary system, which, with the resulting diuretic effect, helps to expel the stones that cause so much pain.

The medicinal uses of chancapiedra are not applied exclusively in the Amazon, but have been extended to popular Chinese medicine and Ayurvedic medicine.

For this reason the plant is found widespread in the Caribbean islands, and even much further, in China, India and in countries of Southeast Asia.

The chancapiedra, cachón de piedra or quebranta piedra, all common names by which it is known, is the species Phyllanthus niruri, from the Euphorbiaceae family; although botanists have managed to identify three more species: P. acutifolius, P. amarus, P. tenellus, all known by the same name chancapiedra, and which have similar efficacy in eliminating or stimulating the expulsion of stones.

It is, at least in the case of P. niruri (the best known species), a small, annual, wild bush, whose height ranges from 30 cm to 60 cm, with an erect stem and abundant alternate leaves, from 7 to 12 cm long. Its fruit is a small capsule, containing numerous seeds 2 to 3 mm in diameter.

The plant has a great capacity to adapt to different soils and ecological levels, and is highly valued by healers and popular medicine, which explains its current wide distribution in the world. The parts of the plant contain lignans and flavonoids, whose medical applications are under investigation.

It is a plant widely studied in the laboratories of the world pharmaceutical industry to verify its many pharmacological properties, which are not only limited to its effectiveness as an antilithic (to stimulate the expulsion of calcium oxalate and uric acid stones), but also may be used to control many other pathologies: urinary infections, cystitis, gonorrhea and other venereal diseases, anemia, tuberculosis, tumors, diabetes, digestive system problems, hypocholesterolemic, etc.

Its greatest applications are as a diuretic and antilithic (or urolithiasis) and as a liver protector, since its effectiveness in combating hepatitis B has been demonstrated in several studies, by blocking DNA polymerase, or the enzyme that the hepatitis B virus needs to reproduce, according to Serruto (S.f.).

Chancapiedra appears also to act as a powerful antiviral. Research is being conducted in this pathway to investigate its effects for the control of herpes and HIV.

How is it prepared?

To expel the “stones,” popular medicine recommends preparing an infusion, composed of 20 g of dry leaves for each cup of water. Then boil it, let it rest, and drink this infusion three times a day, until the pain has subsided and the stones have been expelled. A tincture may be used for the same purpose by diluting 10 to 20 ml of tincture (or a tablespoon) in a liter of water. Another formula is to ingest the root water in a decoction (the liquid remaining after simmering in water).

An infusion can also be taken as a liver protector, in which case a tablespoon of dried herb is used for every cup of water. Boil for five minutes and take it once after it has cooled a little.

Chancapiedra products are marketed in containers as dried leaves, capsules, and extracts (prepared using the leaves and root of the plant).

People with blood clotting problems are not recommended to take products containing chancapiedra.