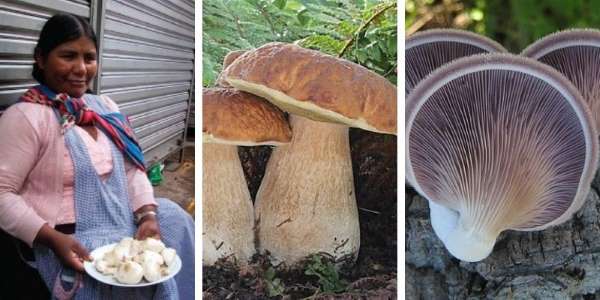 Some 154 species of wild edible fungi have been recorded in the Amazon basin, mostly symbiotic (mycorrhiza, fungus-root association), which contribute to tree growth in nutrient-poor soils.

Studies on fungi in the province of Manu, in the Madre de Dios region of Peru, identified 57 species of fungi, similar to those recorded in other Amazonian countries(Brazil, Ecuador, Venezuela).

Mushrooms in the Amazonian indigenous cosmovision

For some ethnic groups in the Peruvian and Colombian Amazon, mushrooms are not independent of plants, but the “last life of the sticks”.

For them, fungi do not have a visible seed and fruiting bodies develop on the trunks of dead trees.

When a tree dies, its “substance” or “soul” comes out in the form of fungi. The “essence” manifests itself in different ways: animals can be people, and people can be animals.

Trees become fungi after their death and transmit their qualities (poisonous or strong, for example) to the fungi that grow on their dead trunk.

When making the chacra, or chagra, the indigenous people locate the trees where they know these mushrooms can grow in order to search for them later in a sort of “planned” harvesting.

One of these tree species is Goupia glabra. The fungus Lentinus scleropus grows on its trunk.

Mushrooms often take the common name of the trees where they grow.

The women collect the edible mushrooms. To do so, they are guided by the presence of certain beetles that serve as indicators.

Edible wild mushrooms are found throughout the Amazon basin.

Among them, we can mention some typical of each of the regions of the Amazon.

Edible mushrooms of the Bolivian Amazon

Some edible mushrooms from the Amazon in Bolivia are:

Also typical of the Bolivian Amazon region is a mushroom known as callampa, derived from the Quechua word kallampa. It is a white, edible fungus that grows on fallen trunks.

Edible mushrooms of the Brazilian Amazon

Some edible mushrooms from the Amazon in Brazil are:

Edible mushrooms of the Colombian Amazon

Some edible mushrooms from the Amazon in Colombia are:

Edible mushrooms of the Peruvian Amazon

Some edible mushrooms from the Amazon in Peru are:

Another species, the callampa colorada (Pycnoporus cinnabarinus) is a reddish mushroom used in folk medicine to treat pulmonary and postpartum hemorrhages.

The term callampa is also used in the highlands to designate edible mushrooms.

Edible mushrooms of the Venezuelan and Brazilian Amazonia

Despite the abundance of mushrooms in the Amazon basin, few mushrooms are consumed, except by groups such as the Yanomami who consume 21 species of mushrooms.

Some researchers point to the existence of mycophilic societies (fond of consuming mushrooms), such as European countries and Russia, and mycophobic societies (which reject them), such as the countries of the Atlantic coast.

Despite this assessment, there are lexemes to name mushrooms in at least 9 Amazonian languages, including Tukano, Tupi-Guarani and Yanomami.

However, mushrooms do not play an important role in the diet of Amazonian peoples.