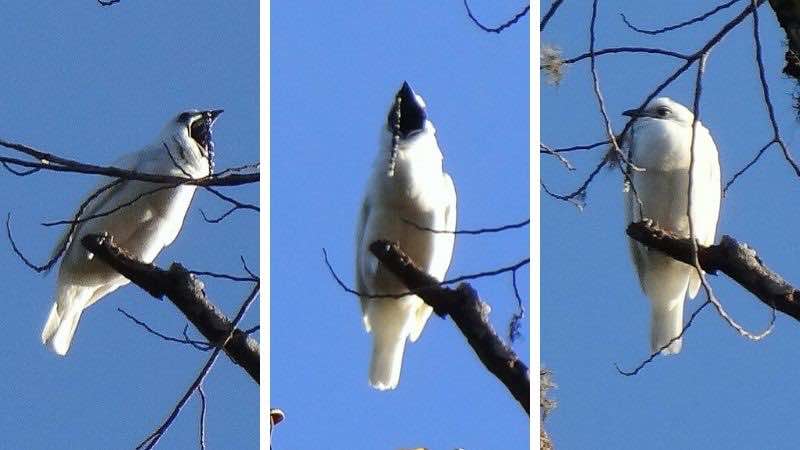 The bellbird (Procnias albus), It is a passerine bird, of the Cotingidae family.

Where does the bellbird live?

It is considered native to northern South America. Although, it is found mostly in the Guiana Shield, in Venezuela, Guyana, French Guiana, Suriname and in the extreme north of Brazil, in the Amazon.

It generally lives in areas below 1,250 meters above sea level. It is typical of the Guiana Tepuis region and the Brazilian high forest.

Characteristics of the white bellbird

The male’s plumage is completely white.

A long, thin, fleshy appendage, like a worm, hanging from its beak is very noticeable.

Its most consequent characteristic is that it emits a cry that constitutes the “highest documented amplitude vocalization for any bird, with maximum sound pressure levels”,

According to Jeff Podos and Mario Cohn-Haft.

These researchers recorded their songs, which reach up to 125 decibels, much higher than the screaming gamekeeper or screaming piha of Australia, considered the loudest bird in the world until 2019.

It feeds mainly on various fruits of the forest.

It is difficult to observe the white bellbird because it generally lives in the highest canopies of the forest.

There are two subspecies of the bird: One is P. albus albus, in the Sierra de Lerma, in the Canaima National Park, in the east and extreme south of Venezuela, in the state of Bolívar, and in the Guianas and north of Brazil.

The other, P. albus wallacei, lives in the Sierra de Carajás, in the southeast of the Brazilian state of Pará.