The jocote is a shrub or small tree of the Anacardiaceae family ( Anacardiaceae), a family that includes more than 70 genera with 600 species, which are divided into five tribes. One of which is the Spondiadeae, which includes the genus Spondias, with 17 species: 7 from the neotropics and 10 from the Asian tropics.

Names of the plant and fruit of jocote ( Spondias purpurae )

Etymology: origin of the name

Its most widespread name in some regions of Mexico, Panama and Central America is jocote, which derives from the Nahuatl term xocotl , which means fruit , acid fruit.

The name of jobo or obo is used interchangeably for two species of the genus ( S. mombin and S. purpurae ), which often leads to confusion. The denomination plum or plum tree should not be confused with Prunus domestica L. , the European plum tree, of the Rosaceae family.

The name of the jocote in English is purple mombin .

Origin and geographical distribution of jocote

It is a little studied species, and little is known about its ethnobotany and diffusion processes. It is considered to be native to Mesoamerica, specifically from southern Mexico. The plant is widely distributed throughout tropical America, from Mexico to Brazil and Peru, and is abundant in Venezuela (it is known as prune de huesito ) and in Costa Rica (it is called jocote).

Where is jocote grown?

Introduced to the United States, it is grown in South Florida. It is a wild plant, and scarcely cultivated , with some exceptions such as the crops in the north of Peru, between Piura and Tumbes, an area where some 30,000 tons are produced annually, which are dedicated to the Peruvian internal market and to export (10%, especially to Ecuador).

In the area, specifically in Virú, a festival dedicated to the Peruvian plum, also called Creole plum, is held annually. Another productive area is located in Santa Ana, Costa Rica, where the jocote festival is held. Like the area of Ambuquí, in the province of Imbabura, in the northern Sierra of Ecuador.

Description of the Creole plum plant

The jocote is a shrub or small tree, 3 to 8 m tall, although it can exceed it up to 15 m in uncultivated conditions.

Its trunk is relatively thick (up to 80 cm in diameter at chest height), with rough outer bark.

It features an extended cup . Its short trunk that branches from 1 m high.

The inflorescence is in a cluster, with small red or pink flowers .

the fruit, which comes alone or in groups of 2 to 3, is a drupe, oblong, round or ovoid, 3 cm long by 1.5 cm wide, weighing 12 to 36 g, with smooth epicarp or semi -smooth, shiny, thin, green in color which, when ripe, turns purple-red or yellow.

The mesocarp or pulp is yellow, juicy, 5 to 7 mm thick, with a pleasant, bittersweet flavor, with a thick and fibrous endocarp, which contains 1 to 5 small, flattened seeds , about 12 mm long.

The edible pulp is relatively scarce, because the stone and the seeds occupy a little more than half of the fruit.

How to plant jocote? (Agronomic management )

The propagation of the plant is generally carried out asexually, by cuttings, cuttings, layering .

It is rarely propagated (or sown) by seed, because the growth process is very slow.

In the wild, the seed is dispersed by animals (zoochory).

The jocote is resistant to adverse conditions. For this reason it is used to recover degraded soils.

It is a plant widely used as a living fence , to delimit paddocks, because cattle take advantage of its foliage and its fruits.

The plant frequently grows in home gardens in rural areas. It is used in some cases as an ornamental plant .

The plant has the advantage of its rapid adaptability and relatively fast growth . It can be grown on rocky soils, with low fertility, and with steep slopes.

These characteristics make it a likely strategy to reduce soil erosion in degraded soils, and to restore nutrient cycling.

When cultivated, a planting density of 194 plants per hectare is used.

The commercial fruiting of the plant occurs in the seventh year of establishment.

The fruit has a short shelf life, which limits its internal and external marketing.

Its delicate fruit requires care for handling during the harvest season and its post-harvest transfer.

It is a non-climacteric fruit, which resists only 1 day post-harvest at room temperature. Afterwards, it loses fresh weight and its ascorbic acid content is reduced, and accelerated losses of firmness are observed, it becomes susceptible to production and original flavor, color and aroma are lost (Alves et al 2000).

Pérez-López et al (2004) propose the alternative of harvesting it in a medium yellow state of maturity combined with low storage temperatures to extend its commercialization up to 2 days post-harvest.

Another interesting alternative is to proceed immediately after harvest to processing. 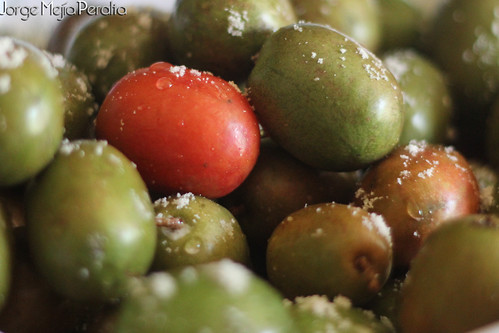 The ripe fruit provides a relatively high caloric value (7 to 8 kilocalories per unit), or 21.8 to 72 kcal per 100 g, and a good proportion of vitamin C and thiamine, and minerals, such as phosphorus, calcium and iron.

The plant also contains, especially in the leaves and in the stem and root bark, antioxidant compounds such as phenols, tannins, coumarins, carotenoids, flavonoids and reducing sugars. Similar results to those obtained in the case of the species Spondias mombin (Jobos, ubos or cajá) .

The fruit has been consumed since pre-Hispanic times, from Mexico to Brazil and Peru, especially in coastal areas. Back then, the fruit was collected from wild plants, and was part of the indigenous diet of populations in southern Mexico and on the Pacific coast.

The fruits and young leaves are consumed raw or cooked, in salads, as vegetables. Even with the fruit a kind of wine and chicha is made. The fruits are also consumed dehydrated, tanned in alcohol or brine.

The leaves and shoots are used as food for cattle and pigs. This use is only possible up to 100 days after the initial pruning, because the wood lignifies and becomes indigestible.

It is a plant used as a honey in beekeeping.

From its trunk exudes a resin that is used to make rubber and glue.

In Brazil, the wood from this plant is used to make paper. Wood ashes are used as an ingredient in soap making.

The leaves and bark of the plant are used for medicinal purposes.

The extract of the leaves and bark is used as a febrifuge. The infusion of the leaves is used in Nigeria (Africa) to wash wounds, inflammations and burns.

In many parts of America the leaves are used to cure gum infections, rashes, measles, scabies. It is also used as an antidiarrheal.

The root of the plant is used topically to treat infections, rashes, and headaches.

An inedible oil is extracted from the seed, which is used to remove warts, acne, moles and skin blemishes.