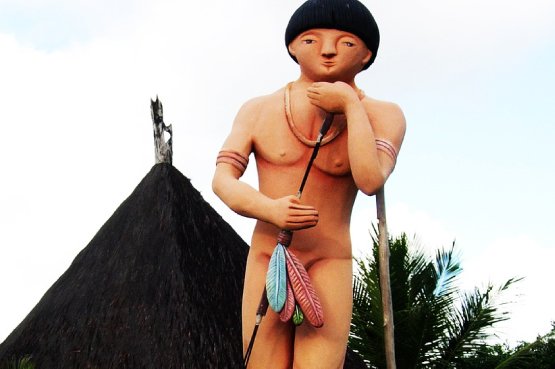 An indigenous person knows how to avoid dangers and find a cure or an antidote for them because he has been trained as a child in the proper use of medicinal plants found in the jungle .

These plants are used to lower high fevers, combat diarrhea or hemorrhage, and heal wounds or ulcers, as well as to enter a trance in ritual ceremonies.

How to survive in the Amazon

One of the most interesting and useful books I have read on the subject of human survival in the Amazon is Naked in the Jungle. Survival and Subsistence, written by the Venezuelan explorer and scientist Charles Brewer-Carias. The book is full of illustrations explained in a very simple manner.

Brewer-Carias has extensive experience in scientific explorations in the jungle, beginning in 1960, leading more than 200 expeditions, accompanied by such world-renowned scientists as Julian A. Steyermark, the botanist with the most plants collected in the world, and Basset Maguire, Guayana’s greatest botanical explorer.

The uses of the palms of the Amazon.

Brewer-Carias teaches us in his book, for example, to distinguish between the different species of palms , one of the most abundant genera in the Amazon.

It details and illustrates, with drawings and photographs, about 22 selected species, explaining the most relevant characteristics to identify them, as well as the uses of each.

It also refers to other plants, from which food or drink can be obtained, or which must be avoided because their fruits are highly toxic.

The dangers lurking in the jungle.

One of the biggest problems that a survivor in the jungle has to face is how to protect himself from so many dangers, sometimes deadly: from the threat of many insects, snakes, arachnids, batrachians, that abound in the jungle and that can cause serious injuries, to the diseases that threaten those who inhabit it.

Medicinal plants and remedies from the Amazon rainforest.

Brewer-Carias introduces us to the study of medicinal plants, and teaches us how to recognize, combat or eliminate various conditions, such as:

Hazards of the Amazon Rainforest Floor: How to Protect Yourself

In the aforementioned book it clearly says that in the jungle…

“…the floor is only for walking, because at night all the animals come together”

Charles Brewer-Carías “Naked in the Jungle”

To avoid these animals, the writer teaches us how to improvise a hammock with vegetable fibers to ensure a more protected rest. Other dangers lurk in the jungle as we walk along paths, stepping on dry leaves, under which snakes may hide.

Dangers in streams and rivers of the Amazon.

Bathing in the streams and rivers of the Amazon jungle also exposes us to unsuspected dangers.

The candirú: myth and reality behind a living nightmare.

In the waters, in addition to rays, electric eels and aggressive piranhas, can be found strange fish, like candiru, canero or blue candiro ( Vandellia cirrhosa ), a small fish from the catfish family. Parasitic, thin, elongated and transparent, and about 5 cm long, the candiru stays in the gills of larger fish, feeding on the blood of its host.

It is said that the candiru inserts itself into the orifices (urethra, vagina or anus) of humans who urinate in Amazonian rivers while bathing.

This legend, which has not been scientifically verified and is probably unfounded, has fueled the indigenous popular imagination and the stories of Amazonian visitors since the end of the 19th century, and has interested the scientific world since it was described by the American Eugene Willis Gudger in an article published in the American Journal of Surgery in 1930.

In his survival manual, Brewer-Carias instructs his readers in other survival techniques crucial to surviving in the Amazon, including the following:

Charles Brewer Carías has dedicated a good part of his life to exploring tepuyes. These strange plateaus, whose origin dates back to the formation of the earth itself (Precambrian), are a habitat that favors the isolation of plants and animals, where it is logical to find new species not yet cataloged.

In 2004 the adventurer, together with a team of explorers, visited a cave on the top of the Chimantá tepuy, which he had seen a couple of years earlier during his helicopter overflights.

The cave was later named after him as the Charles Brewer Cave, as were also the plant and animal species found there and recorded for the first time by this great Venezuelan explorer.

Among the books published by this author, the following stand out: Entrañas del Mundo Perdido (Bowels of the Lost World), Roraima: La Montaña de Cristal (Roraima: The Crystal Mountain), and La Vegetación Del Mundo Perdido, Venezuela (The lost world of Venezuela and its vegetation).